Sydney Test: Can West Indies avoid a 3-0 thrashing against Australia?

AUS vs WI 3rd Test: Going into the third Test, the big question is not whether West Indies can push for a consolation win, but if West Indies can somehow avoid a 3-0 embarrassment.

Going into the third Test, the big question is not whether West Indies can push for a consolation win, but if West Indies can somehow avoid a 3-0 embarrassment. The gulf between the two teams is so wide that the Windies, even in their most distant dreams, cannot think of putting in across the mighty Aussies. They will take heart from the improvement they showed Melbourne though. After being defeated by a huge margin of an innings, they managed to make Australia bat a second time in the Boxing Day Test. As for Australia, they would just be keen to continue their awesome run. 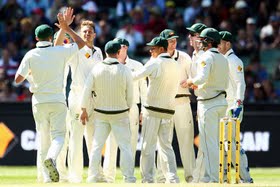 Usually, teams avoid changing a winning combination. But, in the eleven that they have announced, the hosts have included a second spinner in Steve O'Keefe in place of pacer Peter Siddle. Even though the change was inevitable as Siddle was unfit for the match, it was quite possible that O'Keefe would have been included even otherwise as Sydney has traditionally favoured spin bowling. Off spinner Nathan Lyon has been in excellent form in the series, and if O'Keefe can also support him well, Australia can make a significant impression with the ball again in the New Year Test.

Australia's batting has been stupendous in the series, and they would be keen to continue the same. In the first innings at Sydney, Joe Burns, Usman Khawaja, skipper Steven Smith and Adam Voges all slammed hundreds, virtually putting the match out of West Indies' hands. David Warner was keen to blast a hundred, but failed to do so. The left-hander will be keen to make amends. Australia's bowling also has done exceedingly well, with everyone one from Nathan Lyon to Mitchell Starc and even Mitchell Marsh chipping in. Their fielding however was sloppy, and Australia will be hurt as they pride themselves on that area.

Having taken the Melbourne Test into the fourth day, West Indies would be keen to go one step ahead, and draw the final Test at Sydney. Although the series may be lost, avoiding a 3-0 loss would be a moral victory for the visitors. West Indies batting has let them down in both the Tests so far. Dwayne Bravo has been the only one who has demonstrated some amount of consistency with a hundred at Hobart and a 80 at Melbourne. While West Indies will be keen for him to continue the good form, they would need better efforts from the rest. Jason Holder and the West Indians as a whole would be desperate for runs from Marlon Samuels and Jermaine Blackwood.

West Indies might have to make some changes in the bowling although it is not expected to make much of a difference. Kemar Roach has been clueless over the course of the two Tests, and there is every chance that he will be replaced at Sydney. There is a high possibility of Miguel Cummins making his Test debut in the final match. Jason Holder got a half-century at Melbourne, but his bowling remains a worry. Jerome Taylor needs to deliver considering his experience while Jomel Warrican will be keen to improve his record.