Australia strengthened their position further on day three of the Boxing Day Test at the Melbourne Cricket Ground (MCG), on a day when West Indies finally showed a semblance of resistance, with the bat.

Australia strengthened their position further on day three of the Boxing Day Test at the Melbourne Cricket Ground (MCG), on a day when West Indies finally showed a semblance of resistance, with the bat. Resuming at 6 for 91, West Indies managed to extend their innings to 271, thanks in main to Dwayne Bravo's resistance, who defended staunchly in his 81, a knock which lasted a good part of five hours. The debutant Carlos Braithwaite chipped in with 59 as the last four wickets added an unexpected 180 runs. The Windies, for a change, were aided by Aussies' generosity, who were unusually loose in the field. 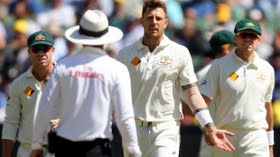 The bowlers also weren't at their best on the day. James Pattinson was particularly poor. He bowled two no-balls before lunch, and both times Braithwaite was reprieved. On 13, he got through the batsman's defence but his foot had landed beyond the crease. Braithwaite took the opportunity and went on to register his half-century in his very first Test innings. On 50 though he hooked the bowler to fine leg. Again. though Pattinson had overstepped and Braithwaite was reprieved. The disappointment was clear on skipper Steven Smith's face. This wasn't the plan with which Australia had stepped on to the field.

Australia began the day hoping for another three-day finish. But, Bravo and Braithwaite ensured West Indies at least avoided that embarrassment. Bravo, who is often compared to Brian Lara, actually displayed shades of Shivnarine Chanderpaul at Melbourne. Bravo used the dead bat to great effect to keep the Aussie bowlers at bay. He opened up a bit only after Braithwaite had got his eye in, and looked comfortable out in the middle. The long partnership between Braithwaite and Bravo ensured Australia were too tired to enforce the follow-on. The stand eventually ended when Braithwaite gave a return catch to Nathan Lyon.

With Bravo eeking out some runs from the tail as well, Smith was forced to bat again. Buoyed by their batting success, West Indies started well with the ball too. Jason Holder opened the bowling with Jerome Taylor, and was successful in moving the ball off the seam. Holder caught Joe Burns off guard, first by nipping one in to the Aussie opener, and then taking it out, getting the edge along with it, and West Indies, after a long time, had a wicket early in the innings. David Warner also fell cheaply, trying to glide a Braithwaite short ball. Holder took the catch and tumbled as an exuberant Braithwaite crashed into him.

Normalcy was restored as Usman Khawaja continued his good form. He eased his way to yet another half-century, and looked set for a hundred when a hint of overconfidence cost him his wicket and yet another Test century. A lazy paddle found the edge of the bat, and the ball settled into the hands of Denesh Ramdin. Skipper Smith remained unbeaten on a run-a-ball 70. Australia ended the day on 179 for 3, a mammoth lead of 459. Despite West Indies' fightback, Australia are all set to ease to another triumph.