The three match Frank Worrell Trophy again ended up being a disappointingly one-sided affair. West Indies went to Australia as the underdogs and performed as a side that was no match for the world champions

The three match Frank Worrell Trophy again ended up being a disappointingly one-sided affair. West Indies went to Australia as the underdogs and performed as a side that was no match for the world champions. Be it in the batting or the bowling, the Windies were found wanting, and their fielding too let the side down badly on numerous occasions. In contrast, Australia had it all easy. Except for the first session of the opening Test in which they lost a few wickets quickly, they remained supreme, both with bat and ball. They were so strong that players had to be dropped after scoring centuries.

What hurt West Indies most during the course of another disastrous series was the lack of success for their experienced performers. Marlon Samuels was the biggest flop of all. It was in Australia in 2000 that he first arrived on the international scene. Fifteen years later, his international career may have ended in the same country. In a thoroughly dejecting effort, Samuels found a way to get himself out with half-baked strokes. It was the kind of terrible series that will give him nightmares. In the absence of Chris Gayle and with Shivnarine Chanderpaul out of favour, Windies were looking up to Samuels. Alas, he disappointed. 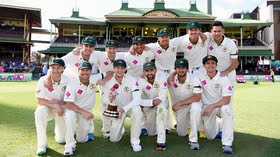 In the bowling, Kemar Roach was equally poor. When in form, Roach can be a dangerous customer for the opponents, and he has troubled Aussies in the past, but in this series, he just hasn't looked the part. Roach has been around international cricket for a while, so this insipid effort would worry West Indies selectors. Jerome Taylor was slightly better in comparison, but much more was expected of him as well. When fit in the past, Taylor had proved to be a dangerous fast bowler. In this series, he definitely wasn't that. The lack of competence shown by the frontline bowlers eased Australia's path.

There really weren't much positives for West Indies from the 0-2 pasting they received at the hands of the Aussies. Darren Bravo was their leading run-scorer, but he only played a couple of good knocks, one of which was converted into a century. With his experience, West Indies needed more out of their number three. Kraigg Braithwaite was another batsman who scored some runs. And while he was resolute during his stay out in the middle, twice he missed out on converting fifties into hundreds. The rest, both in the bowling and batting departments, were merely making up numbers.

In the wake of another disastrous series, West Indies may have to try and ring in some changes for good. But, the problem is that visitors do not really have too many options. Chris Gayle did not play the Test series in spite of being fit, while Chanderpaul is no longer in the scheme of things for the visitors. Considering the lack of options, the Windies may ponder upon bringing back Chanderpaul. They also need to review Jason Holder's role in the team. He hasn't inspired as leader, and his bowling too hasn't been threatening. If anything, he has only made a mark as a lower order bat. Not good enough if you are the leader of the side.