Boxing Day Tests are usually played between two high profile sides. Twenty years ago, the clash between Australia and West Indies would have fit into that category

Boxing Day Tests are usually played between two high profile sides. Twenty years ago, the clash between Australia and West Indies would have fit into that category. But, not anymore. With the current Windies outfit, the 2015 Boxing Day Test may turn out to be the most one-sided match played on the occasion in years. When one considers that Australia have easily thrashed stronger opponents like India, England and Sri Lanka at the Melbourne Cricket Ground (MCG) in recent years, one can only pity Jason Holder’s men, for what might be in store for them could be even more embarrassing.

A victory is not even in the discussion as far as West Indies is concerned. They are struggling in all aspects of the game. The first Test finished well inside the stipulated period of five days. And West Indies did not show a lot of promise in the practice game as well, against a side filled with grade-level cricketers. But, West Indies have promised to be competitive at Melbourne. And cricket fans, irrespective of which country they support, would want a close game, for a match of the stature of the Boxing Day Test deserves a close contest. West Indies better be prepared.

West Indies’ batting lacked any kind of fight in the opening Test at Hobart. Both innings were a story of one-man delivering and the rest faltering. If Dwayne Bravo got a well-compiled hundred in the first essay, Kraigg Brathwaite fell short of one in the second. There was pretty much nothing from the others. The poor form of Marlon Samuels would be a massive concern, and the team would be hoping he returns to form soon. Jermaine Blackwood had a rare bad game, being dismissed for a pair, and he will be due for a big score. West Indies would be desperate to have Chris Gayle back in whites, but that is definitely not happening in Australia. 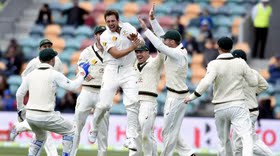 The Windies have plenty to ponder upon in the bowling department as well. Their experienced pace bowling duo of Kemar Roach and Jerome Taylor was completely off boil against the Aussies at Hobart. West Indies cannot afford their strike bowlers to be wayward. There were too many boundary balls on offer. As a result, the Aussies never found themselves under any kind of pressure. Further, the injury to Shannon Gabriel only made matters worse for the visitors. Jomel Warrican was among the wickets, but he went for a lot of runs as well. The Windies might opt for leggie Devendra Bishoo at the MCG.

In contrast, Australia have a problem of a different kind. Usman Khawaja, who announced his Test comeback in twin hundreds before getting injured, is fit again. But, the question is, whom will he replace? In his absence, Shaun Marsh slammed 182 at Hobart. Also, while Joe Burns hasn’t got the big scores, he has been a good support to the smashing David Warner. The left-hander himself has been in fine form while Adam Voges heads into the Test having made a career-best 269. Whoever is dropped in favour of Khawaja must consider himself very unlucky. But, in Australian cricket, tough decisions are hardly surprising.