Can England square the series at Edgbaston?

England should consider themselves lucky that this question is being asked. After all, had another five balls been bowled at Old Trafford, South Africa may have won the series by now.

England should consider themselves lucky that this question is being asked. After all, had another five balls been bowled at Old Trafford, South Africa may have won the series by now. Of course, it could have been the other way round as well, considering England needed to score 13 runs off those deliveries. However, looking at the manner in which they batted in that game, and the form of Proteas’ bowlers, South Africa would have fancied their chances hands down. Now that England have got a lifeline – a chance to square the series – they should try and make optimum use of the same.

Whatever the result of the game, it shouldn’t have a great bearing on how either South Africa or England perform during the World T20 in Sri Lanka since the conditions there will be drastically different from the one in England. Still, confidence is a great thing to have going into a big tournament. The momentum from a previous win always helps a side when it comes to the confidence level of the players. This is exactly why the teams will be keen to end the series on a winning note. 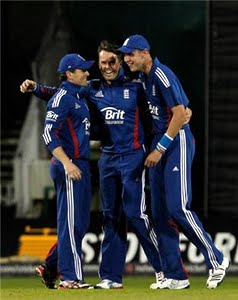 England would like to improve on their batting performance at Old Trafford for sure. Agreed, it was a shortened game and quick runs were the order of the day, but the shots played by the likes of Craig Kieswetter, Alex Hales and Luke Wright were outright slogs. Nine out of ten times, such reckless strokes would get you out rather than bring you runs – it doesn’t matter if it is a nine over game or a ninety over one. The English batsmen can learn a lesson from the manner in which Hashim Amla batted. Yes, he also tried to hit the ball harder than usual, but overall, he maintained his timing and got his boundaries with properly-timed shots, proving that classical play can co-exist even with T20.

One major headache for England in recent times has been whether or not to play the mercurial Ravi Bopara. With the return of Luke Wright to the T20 squad, it seems England will prefer him for the moment. Then again, you never know if things change in Sri Lanka, but the quicker England settle on their final combination, the better for the overall prospects of the side. In the bowling department, Graeme Swann and Jade Dernbach have looked effective, which is a definite positive for England.

On the other hand, South Africa would like to wrap up the series, which would bring to an end a wonderful tour for them. The win in the Tests was historic, they came back well to draw the ODIs, and a T20 triumph just days before the World T20 would be the perfect icing on the cake. South Africa have the men who can deliver the results; they only need to perform to potential on the day.