South Africa had an off day with the bat

Teams, no matter how good they are, are bound to have their bad days. It was once such occasion at the Kennington Oval, London. It very rarely happens that Hashim Amla, Graeme Smith and skipper A B de Villiers all fail in the same match.

Teams, no matter how good they are, are bound to have their bad days. It was once such occasion at the Kennington Oval, London. It very rarely happens that Hashim Amla, Graeme Smith and skipper A B de Villiers all fail in the same match. Well, all of them got starts but none of the trio managed to reach even a half-century, as a result of which South Africa folded up for a meagre total, which England managed to chase down following a few hiccups. It was a win that took the hosts back to the number one ranking in ODIs.

The rankings don’t mean much here, for both the teams are building a squad for the future. In the absence of Jacques Kallis, Dean Elgar has been given the number three spot. And, like the experienced top order batsmen, Elgar also got a start but failed to convert it into a substantial score. Unlike Smith and Amla, this is a critical series for Elgar since he is pitching for the spot when Kallis is gone. As such, he must try and transform as many opportunities he gets into noteworthy scores. 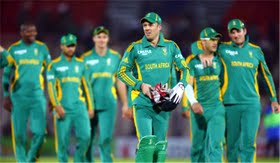 Friday’s loss also exposed Proteas’ weakness in the lower order batting. Faf du Plessis is a good emerging talent, but at the number five position he is yet to establish himself. There are also thoughts that he is batting once position up the order, and could be pushed below the more experienced Jean-Paul Duminy. Here again, the left-hander, whilst he has played some excellent knocks for his team, is yet to achieve the consistency desired of him. Also, Duminy is a better finisher than someone who can bat for longer periods of time, which is one of key reasons why he finds himself batting at the number six position for now. A dilemma for South Africa for sure. Plus, something needs to be done about Wayne Parnell at number seven, for he ain’t a good enough batsman to be batting that high in the order.

Even as South Africa had an off day, England deserve credit for catching up with them and pinning them down. Yes, South Africa batted poorly, but the English bowlers also must be complemented for coming up with a worthwhile effort. James Tredwell filled in rather well for Graeme Swann, who has looked ragged on the tour so far. He needed a deserved break, and Tredwell grabbed his chance well. Jade Dernbach also put up an impressive showing on the day, unlike some of his earlier comeback performances. The efforts of these two men, in particular, should please the England management.

Switching focus to their batting, two men held the innings the innings together in contrasting styles, even as the other batsmen disappointed. Jonathan Trott proved again that he is the best man to have at number three for England, especially in a tense chase. Also, Eoin Morgan, when his brings out his innovative best, like he did on Friday, is breathtaking.

It wasn’t a convincing win for the Englishmen, but considering all that they have been through in recent times, they will take it without any complaints.