Indian opener Yashasvi Jaiswal scored an impressive century as India defeated Pakistan by 10 wickets to book their place in the final of the ICC Under-19 World Cup.

Indian opener Yashasvi Jaiswal scored an impressive century as India defeated Pakistan by 10 wickets to book their place in the final of the ICC Under-19 World Cup. Indian bowlers did an excellent job to restrict Pakistan to 172 after which Jaiswal (105 not out) and his opening partner Divyansh Saxena (59 not out) featured in an undefeated 176-run stand as India won the contest with 88 balls to spare. India will face either Bangladesh or New Zealand in the final on Sunday.

After Pakistan won the toss and chose to bat first, Sushant Mishra sent back Muhammad Huraira in his first over with a short delivery in his first over. Ravi Bishnoi then dismissed no.3 Fahad Munir for a 16-ball duck with a googly that took the leading edge to point. 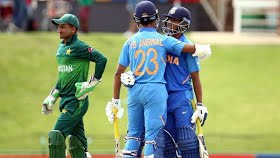 Pakistan skipper Rohail Nazir and the other opener Haider Ali featured in a 62-run stand for the third wicket. However, just when Pakistan needed him to carry on, Ali perished for 56 trying to cut Jaiswal, but only managing to give a low catch to Bishnoi at a point. Qasim Akram was the next man out following a terrible mix-up with Nazir, the video of which has gone viral as both batsmen are seen running towards the same end.

Muhammad Haris looked good during his 21, but a wonderful catch by Saxena cut short his innings. From 146 for 4, Pakistan collapsed to 172 all out. Skipper Nazir top-scored for Pakistan with 62 from 102 balls. For India, Mishra was the leading wicket-taker with 3 for 28 while Bishnoi and Kartik Tyagi picked up two wickets each.

In reply, Jaiswal and Saxena were in complete command as they went about hunting down the target. With three runs needed, Jaiswal smashed a six, his fourth of the innings, to complete his century and a comprehensive win for India. During the course of the innings, Jaiswal became the leading run-scorer in the tournament.

Defending champions India will now look to win their fifth title in the final to be held on Sunday. They are already the most successful team in the competition has captured the crown four times.