India’s under-19 World Cup team manager Anil Patel has revealed that the ICC has taken serious note of Bangladesh’s unwarranted aggressive behavior towards India after defeating the defending champions in the World Cup final at in Potchefstroom on Sunday. Some Bangladeshi players were seen charging towards the Indian players after the game, and the situation got so tense that some players from the two teams nearly came to blows.

Patel added that the match referee Graeme Labrooy even met him and expressed regret over what had taken place after the match. "The referee came to me. He was sorry about the incident. He clarified the ICC is going to take very seriously what has happened during the match and the last session,” he added. 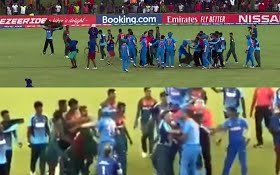 Bangladesh captain Akbar Ali also apologised for the situation that spiralled out of control following Bangladesh’s victory in the final. "Some of our bowlers were emotional and were pumped up. What happened after the game was unfortunate. I would like to congratulate India," skipper Akbar admitted at the post-match conference.

On the stunning victory, Akbar, who was the player of the final for his unbeaten 43, added, "It's a dream come true. It's all about the hard work we have done over the last two years. The coaching staff. I just cannot thank them enough for how much support they have given us on and off the field. We've had a very good experience, and this is just the beginning for us. Hopefully, this will be the stepping stone for us.”