England and Australia continue their support for DRS

England and Australia are happy to continue using the DRS for the rest of their Ashes Series despite several controversial dismissals in the three Tests so far. It is reported in the Media that ICC General Manager Cricket Geoff Alardice had met representatives of both the teams and the ICC Umpires in Durham on Wednesday.

England and Australia are happy to continue using the DRS for the rest of their Ashes Series despite several controversial dismissals in the three Tests so far. It is reported in the Media that ICC General Manager Cricket Geoff Alardice had met representatives of both the teams and the ICC Umpires in Durham on Wednesday.

The ICC GM has confirmed that England and Australia have reiterated their support for the DRS (Decision Review System) and have agreed to use the Hot Spot Technology for the last two Test matches. Mr Alardice on behalf of the ICC has acknowledged that the DRS has not performed effectively during the three Tests of the Ashes Series so far. The ICC GM described his meeting with both the teams as constructive and that their feedback was taken to identify potential improvements in the DRS. 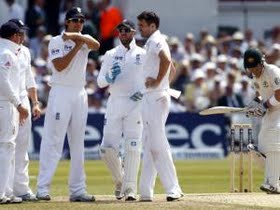 It has been the ‘Hot Spot’ which has been the centre of debate in the ongoing Ashes Series. Batsmen have been given out despite the ‘Hot Spot’ not revealing any flashes on the bat. Mr Allardice revealed that the TV Umpire could give a batsman caught by not just the hot spot but also by the noise from the snickometer and can also make a decision by judging the deflection after leaving the batsman from various angles. Either deflection or sound can be used by the TV umpire to make his final judgment as per Mr Allardice.

According to a press release from the International Cricket Council, Mr Allardice is quoted to have said “Technology is evolving. During the Old Trafford Test, we conducted a trial where a TV umpire accessed replays using a multi-channel monitor system with its own operator and recording device. The aim was to get more replay angles to the umpire, faster, so he will be able to make more accurate decisions and minimise delays to the game. The feedback from this trial has been very positive, and we now need to consider how this technology could be most effectively used as part of the DRS system.

“An ongoing area of focus for the ICC is the training of our TV umpires. Several simulation activities have been conducted over the past 12 months and our elite panel training seminar next month will include several activities aimed at delivering more consistent interpretations of the images and sounds provided to the TV umpire.

“All these activities are aimed at ensuring the DRS continues to deliver an increase in the number of correct umpiring decisions.” said Mr. Allardice.

Meanwhile, down under in Australia, Channel Nine had accused some of the English players like Kevin Pietersen of using silicone tapes on their bat edges to fool the hot spot. And in India, BCCI Chief Jagmohan Dalmiya has said that DRS could be acceptable only if it is fool proof which hasn’t been the case in the ongoing Ashes Series.