It would have been reasonable to assume that after not playing in whites for a year and a half that Chris Gayle would have gradually eased himself into the test game. But anyone who harboured such thoughts would have been taken aback by the way he went out to bat on today's second day at North Sound.

It would have been reasonable to assume that after not playing in whites for a year and a half that Chris Gayle would have gradually eased himself into the test game. But anyone who harboured such thoughts would have been taken aback by the way he went out to bat on today's second day at North Sound.

Sunil Narine had completed his first five-wicket haul in tests to limit New Zealand 351. Being 232/4 overnight the tourists would have been looking to a score of over 400, although their eventual total was still potentially troublesome. 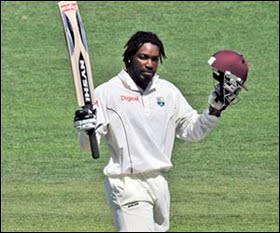 The afternoon session was about halfway through when Gayle and the upright Kieran Powell strode out to open the West Indies innings and at stumps they were still together. Their stand, worth 145 runs, with Gayle 85 and Powell 58, placed their side in the driver’s seat.

After using all of two deliveries to get fully into stride, the tall lefthander dispatched the next four to the boundary. Anything full or wide was treated harshly, and though some shots did not go where he intended, the power of the Jamaican still propelled them to the ropes.

It was as if he lost the ability to switch from T20 mode. Doug Bracewell was taken for three boundaries in one over, as was the talkative Neil Wagner, who replaced Martin after the New Zealand spearhead was pummeled for 24 runs in three overs.

Powell in the meantime had the best view of the mayhem that was occurring at the other end. Under no pressure to score he batted steadily, probably more concerned with how he would avoid one of Gayle’s thunderbolts should one be sent in his direction, than with the New Zealand bowlers.

His technical deficiencies were evident but there was more than just a hint of class when he drove down the ground or played off his legs. He should probably have been out when seven, for he got a thick edge to a ball from Wagner that flew within reach of a frozen Martin Guptill at second slip.

Gayle got a life too. On 36 Flynn badly misjudged a fairly straightforward chance at point off Bracewell, and for that he no doubt had the gratitude of everyone watching.

The introduction of spin served to stanch the run flow. Kane Williamson was introduced in the 18th over with the West Indies already on 87, while Daniel Vettori came on to bowl the 21st. Gayle struck Williamson for his only six but he was not as fluent against the spinners. A run-rate of well over five runs per over when spin was introduced, fell to 3.02 by the time stumps were drawn.

Neither spinner was able to extract the bounce and turn that Narine did but they were still able to pose some problems. Vettori’s upright seam facilitated the drift that allowed him to go past the bat on a few occasions. There were also a number of LBW shouts as Gayle made use of his pads, but the umpire ruled that the deliveries were not turning enough to threaten the stumps.

Narine had removed Wagner in the morning’s third over when the fast bowler was defeated by steep bounce and was caught at second slip. Williamson and Dean Brownlie then dug in and took the score to 273 when Williamson diverted a ball from Kemar Roach that came into him onto his stumps.

The Barbadian pacer should have had the diminutive Kruger van Wyk with his very next ball as the batsman gloved the liftingleg-side delivery through to the wicketkeeper. But the umpire was unmoved and the hosts had already wasted their two referrals. He made 11 before he became Narine’s fifth wicket in only his second test.

The Trinidadian spinner carries a heavy burden of expectation and his performance in this match would have gone some way in educating him on the requirements of test match bowling. Having had a fairytale run in his first class and limited overs games, he was harshly brought back to reality in his first test on the recent England tour. In this game, however, he noticeably made adjustments to his bowling after an unconvincing first spell and reaped success. He should have a long and rewarding test career.

New Zealand went to lunch at 287/7, having scored just 55 in the first session. Vettori smashed Narine for thee boundaries immediately after the break to signal a change of attitude. Later, Bracewell joined in with some lusty blows of his own, including two strikes for six off Narine. His was the last wicket to fall when Chanderpaul took a well judged catch at long on when Rampaul was reintroduced into the attack to dismiss the fast bowler for 39.