Having surprised South Africa by four wickets in the opening one-dayer of the tri-series at Providence in Guyana, West Indies will look to continue the good work as they face world champions Australia at the same venue on Sunday

Having surprised South Africa by four wickets in the opening one-dayer of the tri-series at Providence in Guyana, West Indies will look to continue the good work as they face world champions Australia at the same venue on Sunday. The Aussies will undoubtedly begin the match as favourites, but the Windies will take heart from the fact that the situation was the same when they faced the Proteas in the tournament opener. If they can piece together another competent effort, they can definitely give Australia a close run, particularly considering that the Aussies will be playing their first match, and could be rusty.

West Indies’ victory in the first match was built around excellent efforts from comeback men Sunil Narine and Kieron Pollard. There have been question marks over Narine’s effectiveness, after his remodelled action hasn’t got him a lot of success. But, on a responsive pitch at Guyana, he proved to be too good for the Proteas, who are not known to be great players of slow bowling anyways. West Indies would hope that Narine can continue his great form against the Aussies. Their opponents on Sunday are much better players of spin as compared to South Africa, but Narine has a good record against them. 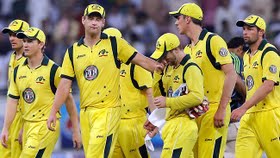 Pollard also did well with the bat on comeback. On a tough surface, where most of the batsmen from both teams struggled, Pollard proved his prowess with his big-hitting ability that took West Indies towards victory. They will still want to show improvements though, especially in the batting department. With no Chris Gayle, Dwayne Bravo or Andre Russell, the Windies would look for better efforts from Marlon Samuels, Andre Fletcher and even the all-rounder Carlos Brathwaite. Darren Bravo provided good support to Pollard in the previous game, but he certainly needs to improve his strike rate.

For Australia, the match on Sunday would mark the return of World Cup hero Mitchell Starc. The left-arm seamer has been missing from action since fracturing his foot in the day-night Test against New Zealand at Adelaide in November last year. He may not be at his best from the start, but West Indies will certainly be wary of him. Considering the slow nature of the pitch, there is every possibility that Australia will play both the spinners, Adam Zampa and Nathan Lyon against the Windies. Josh Hazlewood and Nathan Coulter-Nile could also find a place in the playing eleven.

What will give Australia a massive advantage in the game is their strong batting line-up. David Warner is coming off the back of a sensational, IPL-winning season. Aaron Finch was also in splendid form in the same tournament while Steven Smith, George Bailey, Glenn Maxwell and Mitchell Marsh make up perhaps the strongest middle-order in international 50-over cricket. The Aussies will go into the match believing they are favourites, after all they are the world champions. But, hosts West Indies, from what has been on offer, are not likely to give up all that easily.