After an unexpectedly close encounter in the first Test, the historic day-night game in Dubai, Pakistan and West Indies will lock horns in the second Test beginning at Abu Dhabi on Friday

After an unexpectedly close encounter in the first Test, the historic day-night game in Dubai, Pakistan and West Indies will lock horns in the second Test beginning at Abu Dhabi on Friday. The second Test will be a traditional encounter. Pakistan managed to stave off an impressive challenge from West Indies to clinch the first Test by 56 runs in a hard-fought manner. The hosts, in a sense, would now be keen to clinch the series with yet another winning effort at Abu Dhabi. The Windies, on the other hand, will look to build on their dogged effort in the opening Test, and will hope to register their first win.

Pakistan won the last Test without the services of their talisman Younis Khan. The veteran batsman is all set to make a comeback, and that is only good news for the hosts. In his absence, Azhar Ali took up the responsibility of coming up with the massive score, putting together a triple hundred. Ali’s confidence will be sky high following the brilliant effort. Sami Aslam also came up with a confident knock in the opening Test, alleviating the woes at the top to some extent. 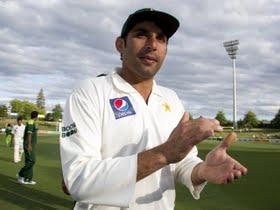 It will be interesting to see what bowling combination Pakistan adopts. Yasir Shah got five wickets in the first innings, and a couple in the second. But, West Indies did reasonably well to keep the Pakistani bowlers at bay. Mohammad Amir managed three scalps in the final innings after going wicketless in the first. But, some of the others were not as impactful. Sohail Khan, Mohammad Nawaz and Wahab Riaz could not do much. As a result, there is a chance that Pakistan may recall Zulfiqar Babar in the second match.

West Indies may have ended up on the losing side. But, they came very close, and competed on an even keel for the first time in the series. Darren Bravo was superb on the last day with his fighting hundred, which nearly took the Windies to an improbable victory. He will look to carry on the great work. Devendra Bishoo’s performance was also spectacular. His eight wickets in the second innings brought West Indies back into the match from out of nowhere. Thanks to his the Windies will now believe they can compete with the ball as well.

The form of Marlon Samuels was one massive worry going into the opening Test for the visitors. And while he wasn’t spectacular, his first innings 76 was definitely a step in the right direction. They will definitely need better efforts from their openers Kraigg Brathwaite and Leon Johnson. A big effort from either of them can make a difference. Jermaine Blackwood must also begin to play the big knocks now. Among the bowlers, Shanon Gabriel and Miguel Cummins will be expected to give Bishoo good support. West Indies would be desperate to somehow push towards a victory.