England fast bowler Stuart Broad feels that England might rotate their bowlers around to share the burden on the fast bowlers during the gruelling five-match series against India.

England fast bowler Stuart Broad feels that England might rotate their bowlers around to share the burden on the fast bowlers during the gruelling five-match series against India.

Broad, who is returning from an ankle injury, was quoted as saying in a Reuters report, “It will depend on tosses, pitches, workloads, if two Tests of 250 overs in the field each, it’s unrealistic to think your seam bowlers will play five Tests in six weeks.”

“I think there has already been small conversations saying about ‘don’t be disheartened if you are left out for a Test,” it’s not a personal attack or dropping, it’s management of your bowlers to make sure we give ourselves the best chance,” Broad explained. 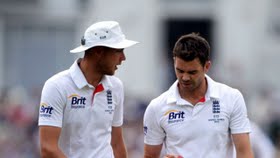 Broad also revealed that he won’t and play county cricket if left out. “I won’t get to the stage where I am left out at say, Lord’s, I’d go back and play county cricket, you stay part of the unit so it’s only natural to expect small changes throughout five Test matches, but the bowlers have to be able to take it,” he added as the teams prepare the first Test starting on August 1.