After much speculation over England’s tour of Bangladesh over security concerns, the series will finally begin, with the first ODI at Mirpur on Friday

After much speculation over England’s tour of Bangladesh over security concerns, the series will finally begin, with the first ODI at Mirpur on Friday. England have arrived with a few of their big names having pulled out of the series fearing for their safety. But, the core of the team remains the same, so they should be confident of doing well. But, Bangladesh go into the series with six successive wins at home. They have been unbeaten over a two-year period. They are fresh from the recent series win against Afghanistan, although they were given a close run.

Bangladesh have a strong batting line-up, which has been one of their major causes of victory in recent times, especially while playing at home. Their destructive opener Tamim Iqbal has been their most successful batsman during the last couple of years, and it is no co-incidence that Bangladesh’s fortunes have risen with his success. Apart from Iqbal, Mahmudullah and Mushfiqur Rahim has also done well for the side. They will be expected to continue the good run. Soumya Sarkar has opened the innings with Iqbal in recent times, but Imrul Kayes has been chosen for this series, so he will be under pressure. 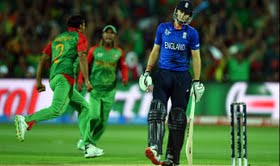 In the bowling, Bangladesh have been dealt with the big blow as their most competent bowler in recent times, Mustafizur Rahman, has been ruled out as he is recovering from shoulder surgery. With him at the helm of the bowling attack, Bangladesh have really gained in potency. In his absence, skipper Mashrafe Mortaza must handle additional responsibility, but he should be confident of doing well. Taskin Ahmed’s bowling action being cleared is also a big plus. In Shakib Al Hasan and Sabbir Rahman, they have two quality all-rounders, who can exploit the conditions adeptly.

As mentioned earlier, England will be missing some of their big names. Regular skipper Eoin Morgan, and opening batsman Alex Hales have pulled out of the tour while another key batsman, unarguably their best in the current generation, Joe Root, has been rested. Jos Buttler will lead the side in the absence of the big names. He has a big responsibility to shoulder, and if he keeps wickets, will have a dual duty to perform. Ben Stokes has been appointed the vice-captain so he will also be expected to lift his game. Jason Roy will be a man to watch out for with the bat even as Ben Duckett is all set to make his debut.

England’s bowling is likely to be tested under the conditions. Although Liam Plunkett has made a successful return to international cricket, it remains to be seen how he adjusts to sub-continent conditions. Chris Woakes and David Willey have done well in recent times, so they should be part of the playing eleven early on. In the spin department, Adil Rashid has been chosen as the main spinner, but he would seek support from Moeen Ali, who has been a reasonable success in all formats.