Would have been happier had Sri Lanka won: Akila Dananjaya

Sri Lankan spinner Akila Dananjaya has said he was satisfied with his six-wicket haul against India in the second ODI.

Sri Lankan spinner Akila Dananjaya has said he was satisfied with his six-wicket haul against India in the second ODI. However, he added it would have been great had his side won the match.

"We would have been happy had we won the game. I am very sad at the moment. I would have returned a happy man had we won," Dananjaya was quoted as saying in a PTI report.

The spinner claimed four of his six wickets with the wrong one which, inexplicably, the Indian batsmen just could not pick. "I am an off-spinner. Wicket taking balls are leg-spin and the googly. I bowl a lot of off spin. Work with Piyal Wijetunga and if I need to bowl variations, Piyal tells me to do so as well," said Dananjaya. 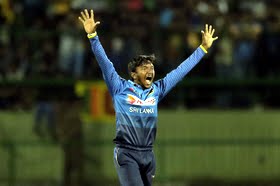 "I realised that the off-spin was not helping much. So I decided to get back to my variations. The target we had to defend wasn't too much either. So we had to take wickets. I bowled a lot of variations and it went really well," he added.

Sri Lanka lost the match after a 100-run unbeaten eighth-wicket partnership between Mahendra Singh Dhoni and Bhuvneshwar Kumar. Dananjaya was taken off the attack after eight overs, and India managed to get home.

"They were set and I thought better to get back later on if someone breaks the partnership. We wanted to win the game. Once wickets come along we also gained confidence. But Bhuvi and Dhoni were superb. They batted really well against our bowlers. Nothing much of a change on the wicket," the spinner explained.

Dananjaya had joined the team immediately after his wedding. "Wedding was in the afternoon. When I got back to the team hotel it was around 11:30 in the night. I wanted to reach earlier than that but it took a little longer. The wedding was at Moratuwa. Finished around 4pm and we were bit late when we came," he said in the PTI report.