Australian spinner Adam Zampa admitted that the team was in a bit of shock over the rock hurling episode on Wednesday. Australia thumped India in the second ODI at Guwahat

Australian spinner Adam Zampa admitted that the team was in a bit of shock over the rock hurling episode on Wednesday. Australia thumped India in the second ODI at Guwahati.

Some upset fans threw rocks at the Australian team bus when the players were returning to the hotel.

On the incident, Adam Zampa was quoted as saying in an NDTV report, "I had my headphones on quite loud and was looking towards the other side of the bus. I just heard this loud bang. It was pretty scary for five seconds or so. Our security guard mentioned quite quickly that it might have been a rock. It was a pretty scary incident. You never want those things to happen. It was disappointing." 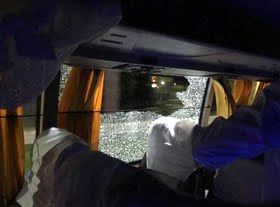 "I think everyone was alright. I think what happened in Bangladesh with the rock as well, no one was too rattled. It was dealt with quite well, I think. It was just a disappointing thing to happen," Zampa added.

Speaking about Indian fans, Zampa further was quoted saying in the NDTV report. "Indian fans are so great to us which is one of the reasons why it's so hard to travel here. They're so loud, they love cricket and they're so passionate about it. So one person to spoil that is disappointing. Guwahati doesn't get much cricket as it is so for one person to do that and to spoil it for the rest of the Indian fans, it's pretty disappointing."