Off Spinner Saeed Ajmal struck thrice late in the day to bring Pakistan back in the game in the Second Jazz Cup Test at the Sheikh Zayed Stadium in Abu Dhabi. England in reply to Pakistan’s 257 are under pressure at 207 for 5 at the end of the Second Day’s play. Saeed Ajmal taking three big wickets mean that England could find it difficult to put up a big lead as they are now left with Ian Bell, Matt Prior and the bowlers to follow.

Early in the day, Pakistan resuming the morning at 256 for 7 were bowled out with the addition of just one more run while losing its last three wickets in just 16 balls! First to go was Skipper Misbah-ul-Haq (84 from 173 balls with 5 fours and 4 sixes) lbw to a late inswinger from Stuart Broad. James Anderson wrapped up the innings removing the no.10 and no.11 in the space of four balls. Interestingly, 10 out of the 11 dismissals in the Pakistani innings were either lbw or bowled! 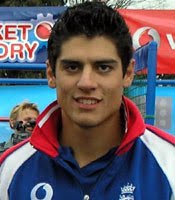 England having got Pakistan bowled out without any fuss went to lunch at a slow 48 for 1 in 24 overs. Skipper Andrew Strauss departed in the 14th over inside edging off spinner Mohammad Hafeez to short leg. Alastair Cook brought up a lovely partnership for the second wicket with Jonathan Trott (74 from 158 balls with 7 fours) before the latter played a tentative half forward defence to a turning ball from left-armer Abdur Rehman which went past the outside edge and hit the off stump. This breakthrough came quite early after the Tea Break for Pakistan.

Alastair Cook fell in the 90s in the 75th over when he failed to read a Saeed Ajmal doosra around middle to get lbw. Cook departed for 94 which took him 220 balls while hitting 10 fours. Saeed Ajmal before the close of play consumed the wickets of Kevin Pietersen and Eoin Morgan to reduce England to 207 for 5 in 84.5 overs. Pietersen (14) was out when an inside edge onto the pad flew to slip in an attempted flick. Left-haned Eoin Morgan (3) fell in the last over poking at a flighted delivery outside off and nicking it to slip. England failed to dominate the Pakistani bowlers all the day with Saeed Ajmal taking 3 for 67 in 29.5 overs and Abdur Rehman taking 1 for 39 in 20 overs. Mohammad Hafeez also strangled the English batsmen with tight figures of 1 for 40 in 19 overs.