Pakistan knock out Sri Lanka from Asia Cup with a thumping win!

Pakistan have knocked out Sri Lanka from the Asia Cup by defeating them by a crushing margin of 6 wickets with as many as 61 balls to spare. The Lankans with two straight defeats have no chance of making it to the finals with that.

It was a decent start for Pakistan although a slow one from its openers. Just when Nasir Jamshed was trying to open up his shoulders and play some shots came the breakthrough for Sri Lanka in the 9th over. It was a quick 141 kmph bouncer from Suranga Lakmal that forced Nasir Jamshed (18) to miscue a pull towards mid on with Pakistan at 29 for 1. Leg spinner Seekkuge Prasanna provided some hope when he lured the other opener Mohammad Hafeez (11) into an expansive square drive to have him caught at point with Pakistan at 31 for 2 in 11.2 overs.

Sri Lanka forced their way back into the match when Younis Khan (2) played a rash flick shot to an inswinger from Suranga Lakmal which was caught by a forward diving Farveez Maharoof at mid on. Pakistan were in trouble at 33 for 3 when Umar Akmal joined Skipper Misbah-ul-Haq. The Pakistani duo defied the Sri Lankan bowling comfortably to steady the innings once again. Soon they got their side cruising towards an easy victory with Lasith Malinga proving to be ineffective.

With Pakistan just a hit away from a victory, Umar Akmal lost his wicket trying to finish the match in style but only to miscue Maharoof to mid on. Umar Akmal by then had played an entertaining knock of 77 from 72 balls with 7 fours and 2 sixes while putting up a match-winning stand of 152 runs with his Skipper. Misbah-ul-Haq remained unbeaten on 72 (from 93 balls with 9 fours and a six) to steer his side to victory in just 39.5 overs. Pakistan with this have picked up a bonus point and are already into the Finals of the Asia Cup 2012 with one more game to go.

Fast bowler Aizaz Cheema who dismissed the big three of the Sri Lankan batting – Jayawardene, Dilshan and Sangakkara got the Man of the Match award.

Sri Lanka bowled out for just 188 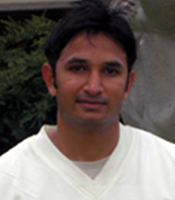 Sri Lanka are in the danger of getting knocked out of the Asia Cup after getting bundled out for a paltry total of 188 in 45.4 overs! It was a dramatic turnaround for Pakistan once they ended what seemed to be an explosive opening stand between Dilshan and Jayawardene.

The Lankans put early pressure on Pakistan with both Mahela Jayawardene and Tillakaratne Dilshan going hard at the bowling. Aizaz Cheema who was at the receiving end fought back tremendously to get rid of both the batsmen to have Sri Lanka at 43 for 2 in 7.1 overs. First, he got the wicket of Skipper Mahela Jayawardene (12) who charged down the track but could only smash him into the hands of covers. Tillakaratne Dilshan (20 from 20 balls with 4 fours) top edged a pull shot off a pacy rising delivery towards mid on.

In the 9th over, Umar Gul complemented Cheema by having Dinesh Chandimal brilliantly caught at slip by a diving Younis Khan for a duck. Sri Lanka soon were 65 for 4 in the 15th over when Lahiru Thirimanne slashed at a widish delivery from medium pacer Hammad Azam to get caught by the diving Umar Akmal at point. Pakistan however lost the plot at this stage and allowed a partnership to grow between Kumar Sangakkara and Upul Tharanga.

Just when Sri Lanka was getting back into a good shape, Saeed Ajmal produced a magical quicker doosra in the 36th over to go through the gate of Upul Tharanga in a straight drive. Tharanga fell for 57 (from 74 balls with 4 fours) while adding up 96 runs for the 5th wicket. Pakistan then chipped away at the wickets to ensure that Sri Lanka never recovered again. Saeed Ajmal played a crucial hand in that as he had Farveez Maharoof (2) top edging a sweep off a doosra to make it 165 for 7.

Umar Gul in a comeback spell got Nuwan Kulasekara caught down the legside by the keeper in a hook shot and Aizaz Cheema got two more wickets to leave Sri Lanka in an utter mess. Sangakkara (71 from 92 balls with 4 fours and a six) who was quickly losing partners at the other end departed in the 43rd over charging down the track for a rash shot over mid wicket but only dragging Umar Gul onto the stumps. Saeed Ajmal wrapped up things in the 46th over when last man Suranga Lakmal miscued a lofted shot to mid off.

Aizaz Cheema finished with figures of 4 for 43 in 9 overs, Umar Gul with 2 for 20 in 8 overs and Saeed Ajmal with 3 for 27 in 8.4 overs to destroy the strong Sri Lankan batting.

Sri Lanka Captain Mahela Jayawardene has won the toss and decided to bat first in the 3rd Match of the Asia Cup against Pakistan at the Shere Bangla National Stadium in Mirpur. The Lankans have made an important change with strike bowler Lasith Malinga coming back in the team to replace Chamara Kapugedera. It’s a must win game for Sri Lanka having lost to India the other day.

Pakistan have made one change with Hammad Azam coming in for Asad Shafiq. The 20-year-old Hammad Azam doubles up with his medium pacers along with his promising batting in the middle order.