We have to sit and assess: Kohli over India's slow approach in England defeat

Hosts England finally snapped India's unbeaten streak in the World Cup as they beat Virat Kohli and his men by 31 runs. Batting first after winning the toss,

Hosts England finally snapped India's unbeaten streak in the World Cup as they beat Virat Kohli and his men by 31 runs. Batting first after winning the toss, England posted a massive 337 on board thanks to a whirlwind century by opener Jonny Bairstow and another blazing half-century from all-rounder Ben Stokes.

In reply, India lost Lokesh Rahul for a duck after which they batted at a snail's pace to reach 28 for 1 after 10 overs. Skipper Virat Kohli (66) and centurion Rohit Sharma then lifted the run rate. Cameos by Rishabh Pant (29-ball 32) and Hardik Pandya (33-ball 45), Left India needing 104 off the last 10 overs. However, MS Dhoni and Kedar Jadhav could not up to the ante after Pandya's dismissal as the innings lost steam. 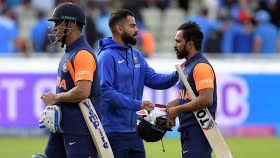 Expectedly, Kohli was asked about Indian pulling down the shutters too early in the chase. "It's up to the discussions with the two guys who were in there. I think MS was trying really hard to get the boundary but it wasn't coming off. They bowled in good areas and the ball was stopping, hence it was difficult to bat towards the end. We have to sit and assess and improve on things in the next game," admitted Kohli.

England skipper Eoin Morgan was happy with India's slow approach in the end overs as it allowed it bowlers to settle in nicely on a good length "It didn't really bother me. I was really happy with India's approach sitting back. But our bowlers were superb," stated Morgan.

Meanwhile, Kohli did express surprise with the shorter boundary in place for the game. Aside from the boundary was only 59 meters, just a little short of the ICC guidelines.

"The toss was vital, especially looking at the boundaries that are so short. And it's a coincidence that it just falls under the limitations of the shortest boundary you can have in the tournament. Quite bizarre on a flat pitch, it's the first time we are experiencing this. It's crazy that things fall in place like that randomly," the Indian skipper said with a hint of bewilderment.

India now faces Bangladesh and Sri Lanka in their next two encounters while England takes on New Zealand. Neither side is assured of a place in the top four yet.