Kolkata Knight Riders skipper Gautam Gambhir has hit out at Dhoni's critics. “There is no one like a finisher or a starter. Ultimately, the one who scores the winning run is a finisher, irrespective of whether he’s an opening batsman or No 11. What matters is how much you are contributing. If you can win matches for your team, you are a finisher,” Gambhir said while speaking to reporters ahead of KKR’s match against Rising Pune Supergiant. 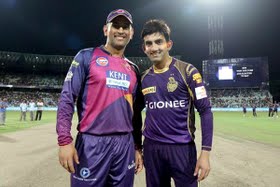 Dhoni played a match-winning knock on Saturday, but struggled against Mumbai Indians on Mumbai. “Here (in India), we start criticising if someone has one or two bad matches. He (Dhoni) is a quality player and we all know what he has done for India and the IPL. It is an important game, and rather than thinking what he can do, I think what KKR will do is all that matters,” added Gambhir.

On facing Pune Supergiant, he admitted it was a challenge. “That is very good for the team because if everyone is contributing, it is a great sign for any team. And that is what we want in KKR as well. We don’t want to be dependent on one or two people; we want to be dependent on everyone. If everyone starts performing, starts chipping in, because in the T20 format, there will be players who would end up getting one or two important wickets and there will be people who will get 10-ball 20.