Bangladesh fought hard with the bat on day three of the Hyderabad Test at the Rajiv Gandhi International Stadium on Saturday. They ended the day on 322 for 6, after not beginning the day well. Shakib Al Hasan, Mushfiqur Rahim and Mehedi Hasan Miraz were the stars of the day for the visitors.

By stumps though Bangladesh were still trailing India by 365 runs with four wickets in hand. India made 687/6 declared in their first innings. The fight back by Bangladesh was rather impressive considering they had lost three wickets in the first session.

At one point of time, Bangladesh were in trouble at 109 for 4. Shakib led the way for Bangladesh with a hard fought 82. The all-rounder seemed set for a Test hundred. However, a poor stroke saw him being dismissed as off-spinner Ravichandran Ashwin got first wicket. 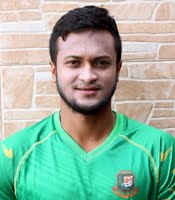 During his innings, Shakib, slammed 14 boundaries and faced 103 balls. Trying to hit Ashwin out of the crease, he only managed to hold on to Umesh Yadav at mid-on. After Shakib was dismissed, Rahim and Hasan also batted well. Rahim was unbeaten on 81 at stumps with Hasan was not out on 51. The partnership was worth 113.

Bangladesh resumed the day at 41/1. A terrible mix-up between Tamim Iqbal and Mominul Haque, coupled with a brilliant piece of fielding by Yadav, ended up in the former being run out.

Yadav then went on to send back Mominul Haque leg before. Ishant Sharma also got into the act, as he dismissed Mahmudullah a little before the drinks break as Bangladesh ended on 109/4.

Post lunch, Shakib and Rahim led the fight back for Bangladesh. Ravindra Jadeja dismissed Sabbir Rahman to bring India back in the match. Rahim and Hasan ensured Bangladesh had a decent day at work.