Check here India Vs Englad One Day International (ODI) Records and Stats (Since 1974).

England and India have competed against each other in One Day Internationals (ODIs) since 1974. They have met on 86 occasions with India being most successful with 46 victories, England have won 35, two were a tie and three were declared a no result. The teams have played each other seven times at the Cricket World Cup, they have both won three of these matches and one was a tie. 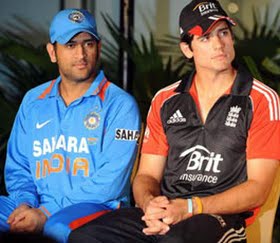