Looking back at Rajasthan’s unbeaten streak in CLT20

There has been something about the Rajasthan Royals side that has been so amazing in the Champions League so far. In all the four games that they have featured in so far they have been imperious.

There has been something about the Rajasthan Royals side that has been so amazing in the Champions League so far. In all the four games that they have featured in so far they have been imperious. Their performance in the series makes them the best team of the league matches, and among the favourites to clinch the title. Of course, they have often faltered after making impressive starts to tournaments in the past, but in this series they have been on a different level so far. Here’s a relook at Rajasthan’s four back-to-back wins. 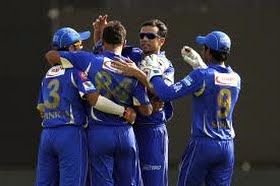 1st match against Mumbai Indians: In the opening encounter, they got the better of Mumbai by a wide margin of seven wickets. It was their excellent bowling performance that set up the win for the Royals. Batting first, Mumbai were restricted to 142, with Vikramjeet Malik coming up with a superb spell of 3 for 24. The other bowlers also combined well to restrict the gifted Mumbai side. In reply, Rajasthan found their batting hero in Sanju Samson, who made a sparkling half-century to take his side home. Further, Ajinkya Rahane, Shane Watson and Stuart Binny came up with crucial cameos.

2 nd match against Lions: This time, Rajasthan batted first and put up a highly competitive total on the board. Brad Hodge made a scintillating 46 from 23 balls to take Rajasthan to a score of 183 for 5. They were some impressive performances from the others as well – Rahul Dravid making 31, Watson 33 and Binny 38. With the ball, Rajasthan forever kept Lions under pressure. 41-year-old leggie Pravin Tambe starred for Rajasthan will superb figures of 4 for 15. Vikramjeet Malik and James Faulkner grabbed two wickets each to help restrict Lions to 153 for 9.

3 rd match against Perth Scorchers: Perth have had forgettable CLT20 campaign, and Rajasthan gave them a real hiding. After putting them into bat, Rajasthan restricted Perth to a measly 120. Kevon Cooper was the wrecker in chief with figures of 4 for 18. Faulkner and Tambe provided excellent support by picking up a couple of wickets each and also restricting the runs. In reply, Rajasthan got home in a canter courtesy a brilliant partnership between Ajinkya Rahane and Sanju Samson. Rahane made an unbeaten 62 from 53 balls and Samson remained unconquered on 50 from 42 balls as Rajasthan won by nine wickets.

4th match against Otago: Even if they had lost the last clash, Rajasthan would 4 have had a decent chance of making it to the semi-finals, but they held their nerve well to get the better of Otago in a close encounter. Bowling first, Rajasthan were highly incisive in restricting Otago. Rahul Shukla grabbed 3 for 23 and Cooper ended with figures of 2 for 33 as Otago were kept down to 139 for 7. Rajasthan found the going tough for a change. However, Rahane’s half-century at the top and Hodge’s blitzkrieg (52 from 23 balls) lifted them to their fourth consecutive victory.