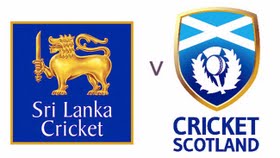 The Bellerive pitch has been high scoring this summer, with Australia chasing down 304 against England in January and Zimbabwe almost overhauling Ireland's 331 on Saturday. The forecast for Wednesday is for a partly cloudy day and a top of 22C.

These teams have met only once before: Sri Lanka enjoyed a 183-run victory in Edinburgh in July 2011Kyle

Kumar Sangakkara is the only batsman to have scored more than one century in this World Cup. He has made three