Australian all-rounder Marcus Stoinis (59 not out off 18 balls) came up with an incredible display of big-hitting as the hosts got the better of Sri Lanka by seven wickets in match number 19 of the ICC Men’s T20 World Cup 2022 on Tuesday, October 25. Chasing 158 for victory in the Group 1 match in Perth, Stoinis recorded the fastest T20I half-century by an Australian, which came off only 17 balls.

The Aussie all-rounder struck four fours and six sixes at his home ground as the defending champions got to their target in 16.3 overs. He hit Wanindu Hasaranga (0/53) for two sixes and a boundary in the 15th over of the chase. He also went after Maheesh Theekshana and took three sixes off him in one over, also reaching his fifty in the process.

Earlier, Australia lost David Warner for 11 in the chase and Mitchell Marsh for a run-a-ball 17. Glenn Maxwel came and scored 22 off 6 balls. He slowed down and was even hit on the throat by Lahiru Kumara. Chamika Karunaratne dismissed him for 23 off 12. While Stoinis went berserk, Australian skipper Aaron Finch struggled and returned unbeaten on 31 off 42 balls. He hit only one six in his innings. 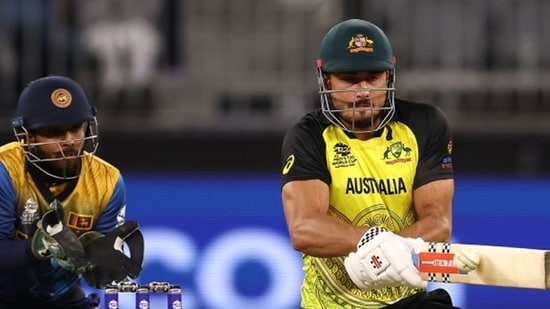 Batting first after losing the toss, Sri Lanka were held to 157/6 in 20 overs. In-form opener Kusal Mendis was out for 5 to Pat Cummins. Pathum Nissanka and Dhananjaya de Silva 69 for the second wicket before both fell in quick succession. De Silva (26 off 23) was caught at long-off, while Nissanka was run-out for 40 off 45.

Bhanuka Rajapaksa, Dasun Shanaka and Hasaranga all registered single-figure scores. However, Charith Asalanka (38 not out off 25) and Chamika Karunaratne (14 not out off 7) took the Lankans past 150. It was just not enough in the wake of Stoinis’ assault.

Reflecting on his match-winning innings, Player of the Match Stoinis admitted that he was nervous playing in front of his home crowd. He said, “I was really nervous today being at home in Perth, lot of family and friends here. So, I was really nervous going into it, but really happy that we ended on putting up a clinic there. Mentally I was nice and fresh, I had a bit of time off looking after the side strain, it's been sort of plaguing me on and off for a while now, but so far so good.”