CWC 2015 NZ vs SA Semi-final: In what can and should be described as the match of the 2015 ICC Cricket World Cup so far, New Zealand trumped South Africa by four wickets at Auckland, and created history by entering the World Cup final for the first time.

In what can and should be described as the match of the 2015 ICC Cricket World Cup so far, New Zealand trumped South Africa by four wickets at Auckland, and created history by entering the World Cup final for the first time. There were numerous tight moments in the game, and the pressure got to both sides. Catches were dropped, there were silly midfields, run-outs, missed run-out opportunities, and catches grassed with fielders colliding. In between, there were some splendid batting displays by players from either sides, and a couple of bowlers also put their hands up to even up things. In the end, Kiwis were a little too good, and South Africa unlucky again. 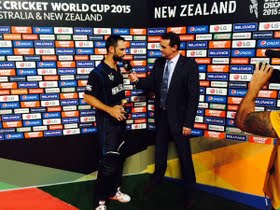 If Martin Guptill was the hero in the quarter-final, the mantle must definitely be passed on to Grant Elliott for the semis. His selection was debated when the Kiwi squad for the World Cup was chosen, as it was with the case of Guptill. But, the South African-born Elliott proved what a master-stroke his presence in the team has turned out to be. Elliott came into bat when his side was under extreme pressure. The South Africans were clearly on top having picked up key wickets. But, Elliott displayed nerves of steel under pressure even as the run rate kept mounting, and New Zealand lost wickets at key moments.

Looking back at the match, the partnership between Corey Anderson and Elliott was the most significant phase of the tense clash. South Africa had clawed their way back with wickets of Ross Taylor and Martin Guptill. However, Anderson and Elliott did not let the pressure get to them. They timed their partnership to near perfection. Even when the boundaries were not coming they did not throw it away, and waited patiently. What the duo did very well was to somehow find the boundary everytime the target looked to be getting tough. Even after Anderson fell, Elliott ensured that he stayed till the end.

After another loss for South Africa in the semis, it will be easy to conclude that they choked. However, that would be an unfair assessment of South Africa's performance. The fact is that they gave it all their all, but in the end the Kiwis were slightly better. Yes, South Africa did crumble under pressure. AB de Villiers messed up an easy run-out, which was followed by one more. Then, two fielders collided to drop a catch in the penultimate over. These lapses cost them dearly. But, ill-luck played its part again. The rain came down even as South Africa were preparing for their final onslaught with the bat. Also, Dale Steyn got himself injured when the team needed him the most.

For sure, South Africa will look back at this match with a lot of regret. There were numerous opportunities during the course of New Zealand's chase when they had their noses in front in spite of Brendon McCullum yet again coming up with a spanking performance at the top of the order. South Africa needed something special to recover from the smashing McCullum onslaught. Morne Morkel delivered the same with a brilliant display of short bowling that put the Kiwis on the back foot. Even going into the last three overs, South Africa had their noses in front. But, injury and poor form rendered Steyn ineffective and, in the end, the Proteas were sadly left in tears.