Having overcome South Africa and West Indies rather methodically, Bangladesh faces their biggest challenge so far in the World Cup

Having overcome South Africa and West Indies rather methodically, Bangladesh faces their biggest challenge so far in the World Cup when they take on defending champions Australia at Nottingham on Thursday. The Aussies are on a roll having returned to their best following the loss to India.

There have been many positives for Australia in recent games. David Warner has been hungry and although he hasn't been getting the timing right always, he has the runs to show. As for skipper Aaron Finch, would you believe this was a man Australia was worried about owing to lack of runs? He really has come into his own this tournament with some big knocks.

Australia will also be pleased that Steve Smith to has looked in good touch. Right from the practice games, Smith has been in his elements. The injury to all-rounder Marcus Stoinis has been a cause of worry but the bowlers have more than made up for it with some excellent efforts. Both Pat Cummins and Mitchell Starc have been brilliant and have kept the opponents on their toes.

Bangladesh won't have it easy against Australia, but they will take in a lot of confidence from the supreme victory against West Indies. Chasing 322, Bangladesh romped home. Again, Shakib Al Hasan was the standout performer with a superlative hundred that doomed the West Indies hopes. Liton Das also made a memorable knock in his very first World Cup game. Bangladesh would now look for bigger scores from Tamim Iqbal and Soumya Sarkar. 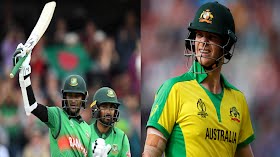 In the bowling, Mashrafe Mortaza will need to lead his troops. It will be an uphill task against a formidable Australian batting line-up. As always, there is a prediction for rain, as a result, batting first may be a little tough at the start. However, as the day progresses, things could ease out.