Out in bizarre fashion: 5 instances of batsmen being given out ‘obstructing the field’

With Ben Stokes given out obstructing the field in the second ODI between England and Australia at Lord's,

With Ben Stokes given out obstructing the field in the second ODI between England and Australia at Lord's, we look at other instances when this has happened in international cricket.

Sir Len Hutton: He was the first batsman to be given out in that controversial fashion during the fifth Test between England and South Africa at The Oval in 1951. Hutton and Frank Lawson had added 53 for the opening wicket, chasing 163, when a rising delivery from Athol Rowan hit Hutton in the gloves, and was briefly airborne. Thinking it was heading towards the stumps, Hutton flicked the ball away with the bat. The rules did not allow Hutton to do so, and he was rightly asked to head back to the pavilion.

Ramiz Raja: The former Pakistan skipper was involved in quite a few innocuous dismissals during his days as a player. In an ODI at Karachi in 1987, Pakistan were chasing 264, built on Graham Gooch's hundred. England won the match easily, but off the last ball, Raja needed two to complete his century. While coming back for the second run though he was was caught unawares, and was adjudged out obstructing the field on 99. Earlier that year, he was also run-out off a no-ball. 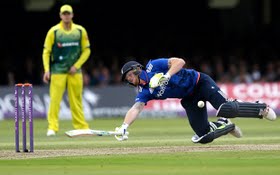 Mohinder Amarnath: He is the only Indian till date to be given out obstructing the field. The incident occurred during the Nehru Cup in1989 against Sri Lanka in Ahmedabad. India, batting first, were in a good position thanks to Navjot Sidhu's fifty. Amarnath and he were in a good stand when Sidhu sent Amarnath back during a mix up. The latter kicked the ball away even as the bowler Ravi Ratnayeke and Arjuna Ranatunga were heading towards the ball. Amarnath, who had earlier been out handling the ball, was this time given out for obstruction.

Inzamam-ul-Haq: He was no stranger to bizarre dismissals. Against India at Peshawar during the 2006 ODI, Pakistan were chasing 305. On 16, Inzamam drove Sreesanth to mid-off, nonchalantly stepping out of his crease. Suresh Raina threw the ball back, and Inzamam defended it with his bat as if it was a normal delivery. The Indians went up in appeal aware that Inzamam had done this while still out of his crease. He was given out, and clearly wasn't pleased.

Mohammad Hafeez: Another Pakistan batsman was given out obstructing the field, against South Africa at Durban in 2013. During the chase, Hafeez was given out while coming back for a second run. He had changed the line of running, and the throw the AB de Villiers hit him. Since Hafeez had modified his line of running, the umpires deemed it out. Another Pakistan batsman walked back after an unpleasant dismissal.