After MS Dhoni's Man of the Series winning performance against Australia in the ODIs, former Australia captain Ian Chappell opines that Dhoni is still the best finisher in the one-day format.

After MS Dhoni's Man of the Series winning performance against Australia in the ODIs, former Australia captain Ian Chappell opines that Dhoni is still the best finisher in the one-day format. Dhoni crossed 50 in each of the three one-dayers in Australia.

Praising Dhoni, Chappell wrote in an ESPNCricinfo report, “Nobody has Dhoni’s nerve for finishing off victories. Many times I’ve thought, “He’s left it too late this time”, only to be amazed as he produced a couple of powerful shots to bring India a nail-biting victory." 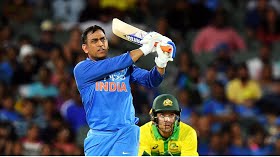 “His outward calm is no illusion sie his tactical adeptness in these situations is proof his brain continues to work perfectly," he added.

On the expected comparison with Michael Bevan, one of the greatest finisher of the game, Chappell rated Dhoni higher on the scale. “Where Bevan finished matches with fours, Dhoni does so with sixes. The one area – running between wickets – where you’d expect the fleet-footed Bevan to have an advantage is debatable, because even at age 37, Dhoni is among the quickest in the game,” he wrote.

“Even allowing for improved bats and the advantage of playing T20 cricket, statistically Dhoni is superior to Bevan. There can be no argument – Dhoni is the best ODI finisher.”

Dhoni headed to Australia for the ODIs after being dropped for the T20s, only to play a stellar role in India’s maiden one-day series triumph in Australia in a bilateral series.