Dravid helped me understand the importance of switching off from cricket: Pujara

India's Test number three batsman Cheteshwar Pujara has praised former India captain Rahul Dravid for teaching him the significance of switching off from the game. Pujara replaced Dravid at the pivotal number three position in Tests for India, and is often hailed as his rightful successor.

"He helped me understand the importance of switching off from cricket. I had the same thought, more or less, but when I spoke to him, it gave me a lot of clarity about it and I was sure of what I needed to do," Pujara was quoted as saying in an ESPNCricinfo report.

Pujara, who has 5,840 runs to his name in 77 Tests termed Dravid as an inspiration both on and off the field. "I cannot say in one line what Rahul bhai means to me. He has always been an inspiration, and will remain one," the 32-year-old added. 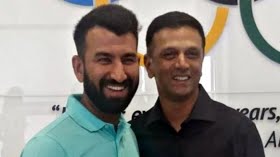 The Saurashtra batsman, however, stated that despite constant comparisons he has never tried to copy the legendary Dravid. "There is a similarity in our games, but that's not because of my fascination with him. That came mainly through my experiences with Saurashtra, where I learned that scoring a hundred alone isn't enough, you have to carry your team," he said.

"That is how I learned responsibility - it is about helping my team to raise a big total, and for that, I ought to attach importance to my wicket. I learned that from my junior cricket days with Saurashtra, which was a weaker team in domestic cricket," he further added.