KKR vs SRH: Sunrisers will be keen to build on Chennai triumph

IPL 8 38th T20 KKR vs SRH Preview, Live Scores: Kolkata Knight Riders will take on Sunrisers Hyderabad in a night game of IPL 8 at Eden Gardens in Kolkata on Monday.

Kolkata Knight Riders will take on Sunrisers Hyderabad in a night game of IPL 8 at Eden Gardens in Kolkata on Monday. Though Kolkata lost their last game against Royal Challengers Bangalore, it was more of a lottery match since Bangalore gained a significant advantage winning the toss in a match reduced to 10 overs per side. Kolkata would seek comfort in the fact that they defeated Chennai Super Kings in the game before. Sunrisers, on the other hand, would be extremely pleased having managed to get the better of MS Dhoni's men rather comprehensively in their previous match. 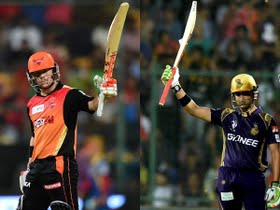 Although traditionally, Kolkata have had the edge over Sunrisers, the latter have every right to believe that they are in with an equally good chance to win this time. Sunrisers defeated Kolkata last time the two teams met, thanks to a brilliant knock by their skipper David Warner. More importantly, they go into the match having hit an impressive winning streak. They have been victorious in three out of their last four matches, after an unsure start. Kolkata, on the other hand, have been highly unpredictable. The threw away an easy match against Chennai, came back to defeat the same opponents, before succumbing to Bangalore in their last game.

While Sunrisers would be elated with their recent run, they would also be aware that their skipper has played a major role in the same, and a majority of them have failed to make significant contributions. Warner has been absolutely brilliant, leading from the front with five smashing fifties. But, on occasions that he has failed, the team has struggled. Shikhar Dhawan has provided able support to Warner, but on a standalone basis, he hasn't played a match- winning knock as yet. The middle-order batting is also a worry. They would need more consistency from the likes of Naman Ojha and Eoin Morgan among others.

Sunrisers' bowling has definitely been a lot more impressive than their overall batting. On more than one occasion, the bowlers have defended mediocre totals. Trent Boult has been impressive, but Bhuvneshwar Kumar and Praveen Kumar have also stood out with their ability to keep things tight under pressure. Whenever he has played, Dale Steyn too has made an impact. Spin is one department where they are weak. Karn Sharma hasn't lived up to the promise he showed in earlier seasons.

As for Kolkata, there really is nothing called form for them. They can blow hot and cold on a given day. Andre Russell's performance against Bangalore typified Kolkata's inconsistency. He first put the team in a great position, with a scintillating batting show, but allowed the game to slip with a poor last over. The Sunil Narine controversy definitely hasn't helped the team's cause, but it has proved to be a blessing in disguise, as Brad Hogg has come in and made an impact straightaway. Kolkata though need more runs out of openers Gautam Gambhir and Robin Uthappa. The poor form of Yusuf Pathan is a worry as well. Kolkata must also look to somehow fit in Morne Morkel, especially since he has a good record against Warner.