Newcomers Navdeep Saini (2/18) and Shardul Thakur (3 for 23) starred with the ball as India registered a convincing seven-wicket win over Sri Lanka in the second T20I at Indore on Tuesday.

Put in to bat after losing the toss, Sri Lanka got off to a breezy start as the openers added 38 inside five overs before Washington Sundar dismissed Avishka Fernando for 22. Saini then bowled a searing yorker to clean up a well set Danushka Gunathilaka for 20 from 21 balls. Kuldeep Yadav got rid of the dangerous looking Kusal Perera for 34.

Yadav also had Oshada Fernando stumped to finish with impressive figures of 2 for 38. Thakur then ran through the lower order to restrict Sri Lanka to 142 for 9. Making a comeback, Jasprit Bumrah claimed figures of 1 for 32, having Dasun Shanaka bowled for seven. 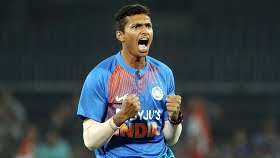 India had it all too easy in the chase of 143 as new opening pair KL Rahul and Shikhar Dhawan added 71 for the opening wicket in 9.1 overs. Rahul’s brisk innings came to an end after he was bowled by Wanindu Hasaranga for 45 from 32 balls. Dhawan was again slow in his 29-ball 32, an innings that will further increase the pressure on him in the wake of Rahul’s success.

Shreyas Iyer contributed 34 and skipper Virat Kohli 30 not out from 17, a knock that featured two sixes, to further ease the path to victory for Team India. Lankan skipper Lasith Malinga was taken for 41 in his four overs as India got home with 2.3 overs to spare.

After winning the man of the match, Saini revealed that he is practicing well and is gaining confidence with every game. He also added that he understands the importance of variations and that speed is not everything.

“I practiced well and I was confident. It's important to be confident and it's also important to use the variations. I was more happy to take a wicket with the yorker (wicket of Danushka Gunathilaka). I am gaining confidence with both white-ball and red-ball. When I made my T20I debut, I wanted to bowl fast, but now I know the importance of the slower deliveries,” Saini said at the post-match presentation.

The third T20I of the series will be held at Pune on Friday, January 10. The opening match at Guwahati was washed out under controversial circumstances.