Batting collapse while chasing a modest total with victory in sight. It was Deja vu from yesterday in the IPL 2020 as the Royals Challengers Bangalore beat the Sunrisers Hyderabad by 10 runs in Dubai. Bairstow was leading his side home with an impressive half century before his wicket triggered a major collapse as SRH lost 8 wickets for 32 runs.

Warner won the toss and as per the norm, put the opposition to bat first. The two players opening for RCB were also making their debuts for the franchise. The young Dedutt Padikkal came to bat alongside the experienced Aaron Finch. Padikkal was coming from a stellar domestic season and he justified his inclusion in some style. The fact that he outplayed his partner Finch with such elegant shots goes on to show that he is here to stay. The bowling from SRH opening bowlers was average as they gave away no balls and wides and were sloppy in the field as well. Fortune also didn’t favour them as Mitch Marsh injured himself in his very first over and couldn’t bowl any further. 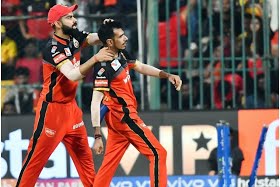 At 90 for no loss around the 11 over mark, RCB were looking good for a total in excess of 180. However, they lost both their openers in consecutive deliveries and that brought to the crease the much awaited duo of Kohli - de Villers. They were cautious in their approach initially and tried to see off Rashid Khan’s four overs. With 5 overs remaining, both of them started to go for the big hits but Kohli lost his wicket in the process to the left armer Natarajan. ABD, however was able to up the ante and struck Sandeep Sharma for consecutive sixes in the penultimate over. Bhuvi bowled a fine last over and RCB were restricted to 163-5.

Chasing a modest 164, SRH were dealt with a huge blow as Warner was run out at the non-striker's end off a delivery that was hammered down the ground by Bairstow and got deflected by Umesh Yadav’s hand. Bairstow and Manish Pandey steadied the ship and struck boundaries on a frequent basis to keep the required rate in check. At 89-1, Pandey tried to clear the boundary to Yuzi Chahal, but failed to do so and holed out to Saini at long off.

With 43 required of the last 5 overs and Bairstow hitting the ball sweetly, victory was in sight for Hyderabad. But then came a moment of brain freeze by Bairstow as he tried to go for an untimely slog against Chahal and lost his stumps in the process. Vijay Shankar came in next but was bowled by a Chahal googly first ball. In the middle of a collapse, Rashid Khan gave some hopes of a comeback with a boundary, but Navdeep Saini ended those hopes quickly by bowling fast and full to castle Bhuvaneshwar and Rashid. Much to everyone’s surprise, a limping Marsh came out to bat at number 10, but got out of his very first ball as stand and deliver was his only option. Steyn performed the final rites to get rid of Natarajan as RCB registered an impressive victory by 10 runs.