New Zealand have named their final 15-member squad for the World T20 next month in Sri Lanka, and there aren’t many surprises in the selection per se.

New Zealand have named their final 15-member squad for the World T20 next month in Sri Lanka, and there aren’t many surprises in the selection per se. The youngsters who struggled in West Indies, namely Andrew Ellis, Tom Latham, Daniel Flynn and Dean Brownlie, have been left out expectedly while former skipper Daniel Vettori, who has been ruled out of the India Tests due to a groin injury, has been included. The inclusion of all-rounder James Franklin was also on expected lines. If anything, the recall of fast bowler Adam Milne for the mega eventwas a bit of a surprise. Having said that, he has been in excellent domestic form this season, and could end up being the surprise package at the tournament.

Although New Zealand had a miserable tour of West Indies, T20 presents them with their best opportunity of making an impression and surprising top sides. Even for that, however, they will need their experienced hands to stand up and perform. Brendon McCullum will be the key man at the top of the batting order for the Kiwis. The New Zealander has vast T20 experience and varied knowledge of this version of the game having played in all seasons of the IPL. He will have to primarily stand up for New Zealand if they are to overcome the hiccups of West Indies. 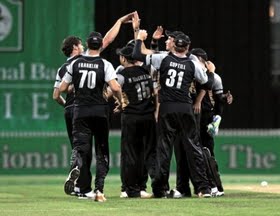 Among the other important players upon whom Kiwis’ fate will hang significantly include skipper Ross Taylor and ex-captain Vettori. Taylor will have the massive task of inspiring the side with his batting performances. Like McCullum, Taylor also has plenty of T20 and IPL experience, which should come in handy as he looks to revive a struggling side. A few swashbuckling knocks by Taylor, which he is eminently capable of, would only do the team good, and improve their prospects of doing well.

Shifting focus to Vettori, he hasn’t been in great wicket-taking form recently, and has also had his share of injury woes. Even so, his decision to make himself available for the World T20 is admirable, in an era where players are picking and choosing formats to elongate their careers. Just having Vettori on the score sheet though cannot guarantee success for New Zealand. The left-arm spinner will have to come up with some handy performances with both bat and ball, if his side hopes to have a decent tournament.

And while on the subject of experienced players, Franklin, Jacob Oram and Kyle Mills also fall into that category now. Neither is exceptionally talented, but they have to rise above the ordinary for the sake of New Zealand’s fortunes. The trio must call all their experience into play as they look to make an impression. On present form, it will be difficult to bet on Kiwis ending up among the top sides in the event, but if the experienced hands can stand up and some youngsters rise to the occasion, they can still spring some surprises.