Having been knocked out of the 2016 World T20, South Africa and Sri Lanka will find motivation hard to come by when they take on each other in an inconsequential encounter at the Feroz Shah Kotla in Delhi

Having been knocked out of the 2016 World T20, South Africa and Sri Lanka will find motivation hard to come by when they take on each other in an inconsequential encounter at the Feroz Shah Kotla in Delhi. It was Sri Lanka's 10-run loss to England on Saturday that sealed the fate of both Lanka and the Proteas. Had Sri Lanka managed to hold off England, the battle for the second slot would have been very much alive. But, they weren't good enough to do the same. As a result, England deservedly went through, leaving Lanka and South Africa behind. It remains to be seen how much inspiration the teams can gather to do well in a match where nothing is at stake.

Sri Lanka's batting against England again let them down. Tillakaratne Dilshan failed again at the top, and perhaps has played his last international match for his country. They have definitely missed Kusal Perera at the top, as Dinesh Chandimal has been a massive disappointment. The same has been the case with Lahiru Thirimanne, who in spite of having been given numerous opportunities, has not grabbed his chances. With the retirement of their legends, Sri Lanka have been forced to give another chance to Chamara Kapudegera. But, he has only got starts, not converting them to anything substantial. Angelo Mathews and Thisara Perera were left with too much to do. 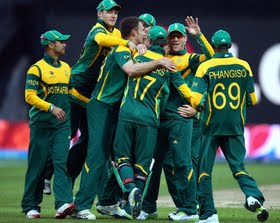 In the bowling, Sri Lanka were always expected to struggle once Lasith Malinga was ruled out after the first match. And, that is precisely how things turned out. Dushmantha Chameera impressed in parts, but he was totally taken apart by England, an indication that he still needs to gain some experience. Nuwan Kulasekara tried hard, but did not have the results to show. On helpful surfaces, Sri Lanka would have been banking on Rangana Herath and Jeffrey Vanderasay to come good. And while they did reasonably well, the performance wasn't as striking to make a significant difference. Like with the bat, Mathews and Perera were left with much to do.

South Africa's struggles stemmed from their lack of adaptability to the conditions, which is a bit surprising since they defeated India in India rather comprehensively not long ago. Perhaps their loss to Australia prior to the WT20 dented their confidence to some extent. They also lacked consistency with both bat and ball. Against England and Afghanistan, they amassed over 200, but yet lost to England, and only just got home against Afghanistan. Versus West Indies when they were worried about their bowling, it was the in-form batting that crumbled. With not much to defend, the Proteas bowled their hearts out, but the effort came a bit too late.

The loss to England defending 229 was a massive setback for South Africa, and they could never really recover from the jolt. This was evident in the performance against Afghanistan where they once looked in danger of losing that as well. Then, in the crunch game against West Indies, the batting side as a whole came apart. A lot was expected of Hashim Amla, AB de Villiers and skipper Faf du Plessis. But, they all failed to rise to the occasion. With the ball, South Africa struggled as Dale Steyn was either unfit or out of form. Kyle Abbott and David Wiese were taken apart in most games, and only Rabada came out with his reputation somewhat in tact. Another early exit for the Proteas, and the doubts will start creeping in again.