IPL 2018: Schedule, timings and all you need to know

The 11th edition of the Indian Premier League will start in Mumbai From April 7. The final will also take in Mumbai on May 27

The 11th edition of the Indian Premier League will start in Mumbai From April 7. The final will also take in Mumbai on May 27. 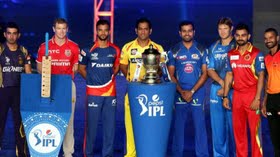 "By and large, the IPL governing council has accepted the proposal of the broadcasters to change the timings," IPL chairman Rajeev Shukla was quoted as saying in media reports.