India captain Virat Kohli expressed relief after India won the second ODI thanks to a stellar partnership between MS Dhoni and Bhuvneshwar Kumar at Pallekele on Friday.

Chasing a D/L target of 231, India were in command at 108 for no loss before losing seven wickets for 22 runs. Akila Dananjaya rocked India with six wickets before MS Dhoni (45 not out) and Bhuvneshwar (53 not out) kept their cool and took India home.

"It was quite an exciting game of cricket. It gave us a tough test out there but was good to come through. Was good to see two 100-run stands in a 230 run chase and then a collapse. Strange game but good that we came through," Kohli said at the post-match press conference. 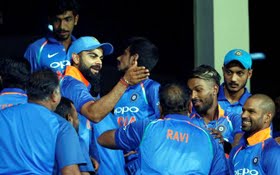 India shuffled the batting order with KL Rahul and Kedar Jadhav going up. Both failed, and then the middle order completely came apart. But, Kohli defended the decision, and instead, gave credit to Dananjaya.

"Akila bowled an outstanding spell. Even batting at No.3, I would have still gotten out to that delivery. It's difficult when you haven't seen the guy but now we will be more careful.

"Credit to him, he capitalized on the hesitation because we were not reading him too well. He attacked the stumps," Kohli admitted.