RR vs KXIP Review: Shaun Marsh proved his worth

IPL 8 RR vs KXIP Match Review, Result: It was as a batsman for Kings XI Punjab that Shaun Marsh first came into prominence, much before he went on to play for Australia, with moderate success.

It was as a batsman for Kings XI Punjab that Shaun Marsh first came into prominence, much before he went on to play for Australia, with moderate success. Marsh had an unforgettable season in the IPL back in 2008. However, he hasn't managed to build on the same since, something which should disappoint him very much. On Tuesday against the undefeated Rajasthan Royals though he proved his worth, and demonstrated what he is capable of. Marsh played a brilliant knock under pressure, and and was pivotal in ensuring that Punjab stayed alive, and headed into the Super Over. There as well, he was the difference, hitting three consecutive fours. 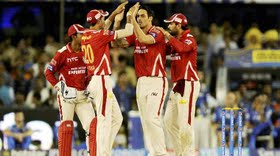 In a match that goes into the Super Over, what matters is how well the players performed over the course of six balls, which is rather unfair, but that's how T20 cricket is. Rajasthan Royals might consider themselves unlucky because they couldn't perform with the bat in six balls, losing two wickets in the Super Over. But, the manner in which they were throttling opponents, it seems this is the only way their winning run would have come to an end. Credit though should go to Punjab for their performance in the Super Overs. Mitchell Johnson bowled well to get rid of Shane Watson while Wriddhiman Saha was alert to dismiss James Faulkner.

What Punjab did very well in the match was to stay in the big chase in spite of losing wickets early in. The partnership of David Miller and Marsh particularly significant, especially after they lost the big guns Virender Sehwag and Glenn Maxwell cheaply. Marsh looked fluent right through, but Miller did not look in touch early on. To his credit, he stuck around, and really got going towards the end, which played a major role in Punjab levelling scores. While Marsh and Miller were key in the chase, the contributions of the lower order also deserve credit. Saha, Johnson and Axar Patel all hit key fours towards the end.

While Rajasthan would be disappointed with the loss, they cannot blame their batsmen for the same, for they came up with another wonderful display. Ajinkya Rahane's great run just does not seem to end. He played a brilliant knock once again, and in spite of looking in trouble early on, overcame it with a flurry of boundaries. Even Shane Watson did not look in great touch early on, but he also recovered by taking the aggressive route. Karun Nair also came up with a nice cameo to ensure Royals end on a high. Steven Smith's poor form, if anything, is one concern for them.

Rajasthan will need to look at their bowling though, which was exceedingly poor on Tuesday. None of their bowlers could really make an impact, in spite of having a big score to defend. James Faulkner was the most disappointing of them all, conceding over 10 runs an over. For a change, even Pravin Tambe struggled, and Chris Morris and Deepak Hooda also weren't in their elements. The poor bowling performance eventually ended their winning streak.