18-year-old Afghanistan leg-spinner Rashid Khan is elated and surprised in equal measure at being chosen for IPL 10.

18-year-old Afghanistan leg-spinner Rashid Khan is elated and surprised in equal measure at being chosen for IPL 10. He was purchased by defending champions Sunrisers Hyderabad for an impressive Rs 4 crore.

Reacting to the development, Rashid, who is currently is Zimbabwe along with the Afghanistan team, told Espncricinfo, "My parents woke up early to watch the auction. I was still sleeping when they called me and told me to get up and watch because I was coming up. So I started to also watch it from here in Zimbabwe and I was really surprised, really happy and really excited when I saw what was happening. I couldn't believe it actually, it happened very quickly." 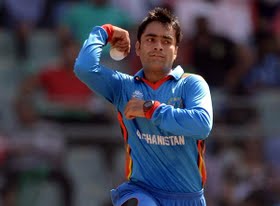 Rashid joins teammate Mohammad Nabi as one of the foreign players. The other three overseas players are also rather illustrious names -- Kane Williamson, David Warner and Mustafizur Rahman. Rashid featured in the 2016-17 Bangladesh Premier League. Playing for Comilla Victorians, which also included Jason Holder, Marlon Samuels, Ahmed Shehzad and Nuwan Kulasekara, he picked up 13 wickets at 14.92.

On what he felt worked in his favour, he added, "What makes me different is that I am a bit quicker for a legspinner. That is something that just came to me naturally, not something that I copied from anyone."

At the Asia Cup last year, Rashid was Afghanistan's highest wicket-taker and the second-highest wicket-taker at the World T20 after Nabi. On the secret of his success, he says, "I love pressure. Mentally, I get myself ready for pressure. That's how I like to play," he said. "Maybe it's because I grew up playing with my brothers all the time and five of them are older than me but I also think it's the experience of playing a lot of cricket in a short space of time."