South Africa have suffered their second injury on their England tour! After Mark Boucher’s tragic eye injury, it’s the turn of Marchant de Lange to be ruled out of the ongoing tour with an injury.

South Africa have suffered their second injury on their England tour! After Mark Boucher’s tragic eye injury, it’s the turn of Marchant de Lange to be ruled out of the ongoing tour with an injury. The tall speedster is suffering from a low back injury which he had sustained during the Unofficial Tri-Series in Zimbabwe and is yet to fully recover from it.

MRI Scans have revealed that Marchant de Lange is having a lower-back stress fracture which would need atleast six weeks of rest and rehabilitation. South Africa have named all-rounder Albie Morkel to replace de Lange. 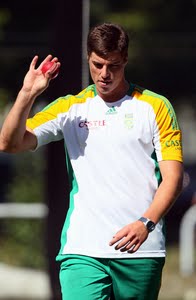 According to a quote from Brandon Jackson (South Africa Phiso) on Cricket South Africa - “Marchant has been diagnosed with a lower-back stress fracture and will require at least six weeks rest and rehabilitation.” Jackson also said - “a bone scan was done after his lower-back pain worsened in the past week, showing inflammation in the bottom vertebrae of the spine.”

Commenting on picking Albie Morkel in the place of the injured de Lange, National Convenor of Selectors – Andrew Hudson said: “Albie Morkel is the ideal replacement for Marchant as he comes into the squad with invaluable knowledge and experience of the UK conditions. He has a good first-class record and his ability to swing the ball and to contribute with the bat lower down the order gave us the extra incentive to rope him in.”