Former India captain Sourav Ganguly feels while Virat Kohli is lucky to have featured in 13 home Tests in a season, it’s still great that India have risen to the number one ranking

Former India captain Sourav Ganguly feels while Virat Kohli is lucky to have featured in 13 home Tests in a season, it’s still great that India have risen to the number one ranking in Tests.

Writing a column for ICC, Ganguly said: “Virat will consider himself lucky as I don’t recall any Indian captain and his team having an opportunity to play as many as 13 Tests at home in a single season.

“You still have to win a game, even at home, but we all knew India would win at least eight Tests, and they won as many as 10, missing out on a sure win in one, saving one and losing one.” 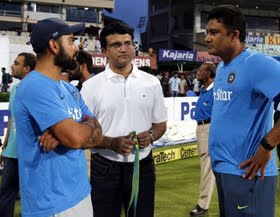 Ganguly hoped Kohli’s team can now win abroad. “I was sitting at home around lunch time on Day three when Australia began its second innings. Over the next hour or so, I watched such great fast and hostile bowling by Umesh Yadav and Bhuvneshwar Kumar. The way they got the Australians hopping and succumbing to the pace, I am so pleased for Virat.

“The most memorable win came in conditions actually tailor-made for the Australians more than the Indians. The fact that India beat the Aussies at their game will surely give another twist to Virat’s captaincy.

“Umesh is so confident. He knows what he’s doing and credit to Virat for making Umesh realise what he can do. When India travel to South Africa this year and to England and Australia the next Virat will need his pacers to be fit and strong. If he can get a good third fast bowler, behind Umesh and Mohammed Shami, India will be a threatening side.”

Ganguly feels the Galle was a turning point for the team. “I think the trigger happened sometime in August, 2015 when, from a seemingly unassailable position, India slipped and lost the Galle Test.

“For a young captain and an equally young team, it was heartbreak and I was actually worried for Virat Kohli. But I was wrong. Like any good leader, Virat sensed the problem, spoke to his team and what has followed since has reinforced my belief in him and his team,” Ganguly went on to add.