Tendulkar wouldn’t have become Tendulkar if he kept batting at No.6: Ganguly on Dhoni promotion

It has been a few days since MS Dhoni announced his retirement from international cricket. However, the praises haven't stopped coming in. Now, Dhoni's first captain Sourav Ganguly has also come out in praise of the retired wicket-keeper batsman.

It was Ganguly, who promoted Dhoni up the order at number three in an ODI against Pakistan at Visakhapatnam, which culminated in the youngster smashing his maiden ODI hundred.

Explaining why he gave Dhoni the opportunity to bat higher up the order early in his career, Ganguly told Sportstak, "He (Dhoni) got the opportunity to bat at No.3 in Vizag, scored a superb hundred and whenever he has got a chance to play more overs, he has scored big. (Sachin) Tendulkar wouldn’t have become Tendulkar if he kept batting at No.6 because you get a handful of balls to play." 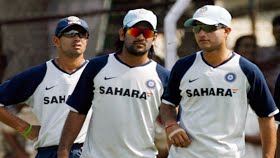 Not only Dhoni, Ganguly backed a whole bunch of youngsters like Virender Sehwag, Yuvraj Singh, Zaheer Khan and Harbhajan Singh, who went on to become match-winners for the team.

“There was Challenger Trophy, he was scored a hundred for my team while opening the batting, so I knew it,” Ganguly added about Dhoni's discovery.

“A player is made when you send him up the order, you can’t make a player by playing him lower down the order. I always believe you can’t become a big cricketer by sitting inside the dressing room.

"The kind of abilities, especially the six-hitting prowess he had, was rare. He changed his towards the end of his career but when the raw MS Dhoni arrived, it was very important to make him free,” Ganguly further said in praise of the 39-year-old.

Apart from his 148 at Visakhapatnam, Dhoni also went on to slam 183 not out against Sri Lanka at Jaipur in 2005. He will be most remembered for his unbeaten 91 from 79 balls in the 2011 World Cup final. Dhoni finished as one of India's most successful and its greatest match-winner.