West Indies won the fifth and final ODI at St Kitts by 20 runs to complete the ODI Series with a crushing margin of 4-1. New Zealand were once again bamboozled by the spin of Sunil Narine, who claimed a 2nd consecutive Man of the Match award and also the Player of the Series award.

West Indies won the fifth and final ODI at St Kitts by 20 runs to complete the ODI Series with a crushing margin of 4-1. New Zealand were once again bamboozled by the spin of Sunil Narine, who claimed a 2nd consecutive Man of the Match award and also the Player of the Series award. Narine today captured his maiden five-wicket haul in international cricket with outstanding figures of 10-1-27-5.

The New Zealanders chasing 242 lost Rob Nicol in the second ball of the innings itself when his full blooded flick was caught superbly by Dwayne Bravo at short squareleg. The Kiwis then looked good as Brendon McCullum and Martin Guptill played positive cricket which lasted only till the 12th over to take the score to 64 for 2. Narine produced the breakthrough with Brendon McCullum (33 from 34 balls with 7 fours) edging a carom ball pitched on leg to slip. Guptill played a couple of aggressive shots but could only come up with 33 from 56 balls with 2 fours and 2 sixes before he was lbw to Narine by playing well outside the line of the ball. 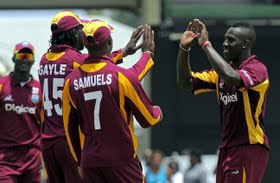 The Kiwis were 77 for 3 in the 18th over when the in-form Ross Taylor joined Kane Williamson. Taylor lasted only 38 balls scoring 28 before he was stumped out in a freakish manner off Marlon Samuels with the ball coming off the Keeper’s pads and hitting the stumps, and the batsman overbalancing out of his crease. The visitors were soon 109 for 5 with Daniel Flynn’s flashy cut getting nicely caught by Sammy at gully. A few overs later, Tom Latham (11) got caught behind by an acrobatic Devon Thomas when the left hander went for a flamboyant drive off Dwayne Bravo leaving the Kiwis to 140 for 6 in the 35th over.

New Zealand seemed to be going nowhere in their run chase, however, Kane Williamson after wasting so many deliveries finally decided to play the big shots. Williamson got wonderful support from Andrew Ellis as the Kiwis began to challenge West Indies’ target of 242. The fightback lasted till the 46th over with Kane Williamson (69 from 84 balls with 5 fours and a six) falling to a brilliant diving catch from Chris Gayle at short mid wicket in a full blooded pull shot off Narine.

The contest was more than over when Andrew Ellis (28 from 37 balls) got clean bowled when he attempted to slog a turning carom ball from Narine in the 48th over. New Zealand folded to 221 all out by the end of their 50 overs. Apart from Narine, Skipper Darren Sammy bowled nicely giving away only 30 runs in a spell of 10 overs on the trot. Sammy came into the attack at a time when the Kiwis were going slambang through McCullum and Guptill and it was his spell along with Narine’s that pegged back things for the visitors.

Andre Russell’s smashing half century helped West Indies recover nicely to post 241 for 9 in the Final ODI at St Kitts. It was the same story for the Kiwis like in the fourth ODI with the hosts in early trouble and then struggling in the middle overs but in the end recovering well to post a competitive total. The New Zealand bowling showed good promise initially but only to fizz out to let the Windies off the hook.

The Kiwis had both the West Indian openers back in the pavilion by the 7th over at 32 for 2. Gayle once again failed, this time cutting a loose delivery from Kyle Mills into the hands of backward point. In the 9th over, Tim Southee reduced the hosts further to 37 for 3 when he trapped Dwayne Smith lbw. The Kiwis failed to make any further inroads but in the 26th over, they got the all important wicket of Marlon Samuels (43 from 59 balls with 4 fours and a six). Tim Southee was the wicket taker as Samuels went back to drive him but the off cutter climbed up to spoon a catch to covers leaving WI at 97 for 4.

In the 27th over, New Zealand struck again when Kieron Pollard (7) played a rash slog across the line off the innocuous off spin of Kane Williamson to give a simple catch to mid wicket. West Indies recovered after the double blow with Wicket Keeper Devon Thomas (20 from 31 balls) adding 53 runs with Dwayne Bravo before the former got out heaving at a full toss in the 38th over. Bravo went onto score 53 from 93 balls (with 3 fours and a six) before perishing in the 44th over by flicking a full toss into the hands of short mid wicket.

West Indies were expected to get bowled out for an ordinary total when Bravo got out at 180 for 8. However, the toothless attack from the Kiwis failed to contain Andre Russell, who finished the innings with a smashing 59* (from just 40 balls with 6 fours and 3 sixes). West Indies now look favourites for another win as they got to a healthy total of 241/9. The pick of the bowlers for the Kiwis were Kyle Mills (10-1-40-3) and Tim Southee (10-1-37-3).

Toss and Teams: West Indies have won the toss and elected to bat first in the fifth and final ODI at the Warner Park in Bassettere, St Kitts. The Series has already been won by the West Indies 3-1. The hosts have retained the same team that had won the 4th ODI at this same venue. New Zealand have made three changes with Andrew Ellis, Kyle Mills and Daniel Flynn coming in for Jacob Oram, Doug Bracewell and Nathan McCullum.