Chahal: I am not thinking about the World Cup yet

India will be familiar facing Ireland in a T20 series prior to the ODIs in England.

India will be familiar facing Ireland in a T20 series prior to the ODIs in England. This is also the venue where the World Cup be held next year. But, Team India spinner Yuzvendra Chahal has said they aren’t looking that far ahead. 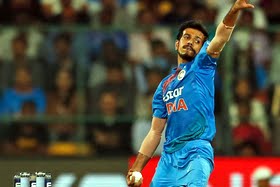 Speaking about the challenges ahead, Chahal was quoted as saying in a CricBuzz report, "We played in South Africa and performed well there but that is the past. We are in Ireland now, so I am thinking that I am playing a strong opposition and cannot judge a team on its name.

"Obviously I am excited that this is my first tour in UK. I'm not thinking about the World Cup because there are still 6-7 months left to think about it. There are so many series before that, so I am thinking series by series instead of looking at future," added Chahal.

When asked about England’s 5-0 thrashing of Australia, Chahal replied, "England have scored against Australia, they haven't scored against us. Wickets might be different. English spinners have also picked up wickets. So that is also a plus point for us.”