AB de Villiers will lead Royal Challengers Bangalore in the opening stages of IPL 2017 if normal captain Virat Kohli cannot recover in time from shoulder injury he sustained during the Test series against Australia.

Daniel Vettori, head coach of the franchise, informed reporters in Bangalore, "He (Kohli) will come in on April 2. Between now and then, the BCCI doctors and physio will speak to us and our medical staff will get a clearer picture. Right now, we don't have a clear picture on his availability. We will know in the next few days.

"The likely scenario is that AB de Villiers will take over the duties, but we'll answer that once we find out if Virat is out," Vettori further added. 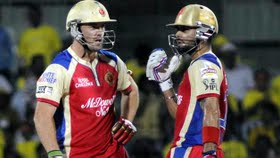 Kohli injured his right shoulder while diving to save a boundary during the Ranchi Test, and subsequently missed the Dharamsala Test. "It's still a few weeks to go before I can be 100% on the field. But these things happen in your career. Got to take it in my strike and move forward," Kohli had said earlier.

"It's a huge asset for us that someone else can fill in those gaps. Sarfaraz has been really good. At the back end of the domestic season he started to put some runs on the board. Everyone knows how talented he is. With possible injuries, he could get an opportunity early on in the tournament," Vettori went on to add.