World T20 2016, 25th Match Live Score: Bangladesh need 2-run in last three ball but India picked up three wicket and win by one run in must win game in Bangalore on Wednesday.

Bangladesh need 2-run in last three ball but India picked up three wicket and win by one run in must win game in Bangalore on Wednesday.

R Ashwin is Man of the Match. We've never really got together and worried so much. I don;t have anything left. I'm drained after today's game. I'll just crash now.

Tamim is back for Saqlaib Sajib.

MS Dhoni: Looks like a tacky wicket, but maybe a bit of dew later on. This is one surface that will remain good. If there's a bit of moisture it may turn. It looks like a good surface, but I've been wrong twice, I could be wrong again. The team is feeling good. India Pakistan was always a big game, we prepared well. No changes 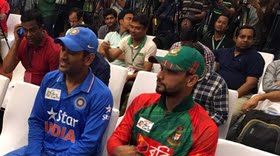 After a big loss to New Zealand in their opening match, India found their footing with a Virat Kohli masterclass against Pakistan, and are now eyeing the semi-finals. They will face a Bangladesh side, reeling from two defeats, to add to the absence of Taskin Ahmed and Arafat Sunny.

Bangladesh's batting woes will be compounded if Tamim Iqbal isn't fit to play.

Taskin Ahmed has been a very important bowler for them, but at the same time Mustafizur Rahman, who did not play 2-3 matches in between because of a side strain, he is back. Al-Amin is there. They have depth in bowling. Shakib Al Hasan is a very good allrounder.