After all the controversy in the build-up, India and Bangladesh will finally kick off the series with the first T20I at the newly renamed Arun Jaitley stadium in Delhi. Bangladesh was dealt

After all the controversy in the build-up, India and Bangladesh will finally kick off the series with the first T20I at the newly renamed Arun Jaitley stadium in Delhi. Bangladesh was dealt a big blow just days prior to the start of the series when their T20I and Test skipper Shakib Al Hasan was banned by the ICC for failing to report three corrupt approaches. Further, the emergency level of air in India’s capital is also a cause of concern. However, BCCI has clearly stated it is too late to change the venue.

The series will all be about identifying young talent for India as the World T20 in Australia approaches. With regular skipper, Virat Kohli rested, Manish Pandey could get a chance to sneak in a few innings. And, considering his struggles in the Nidahas Trophy final against the same opponent, it will be imperative for him to make the same count. Shreyas Iyer, who has made an excellent return to international cricket, will get another opportunity to strengthen his case. The series also marks the comeback of Sanju Samson and could see promising all-rounder Shivam Dube make his debut. 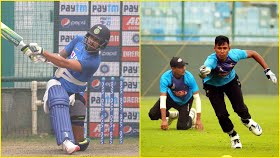 The bowling department is also relatively inexperienced with the likes of Jasprit Bumrah and Bhuvneshwar Kumar missing from action. Yuzvendra Chahal is the most experienced bowler from the pack. All-rounder Krunal Pandya, Khaleel Ahmed, Deepak Chahar, and Washington Sundar should occupy the other spots following their decent run in previous games.

In Shakib’s absence, Mahmudullah will be leading the team. It will be a big responsibility for the experienced batsman as the side looks to get its act together under a new captain. Apart from performing well with the bat, Mahmudullah will also need the support of the seniors in the team -- Mushfiqur Rahim, Mustafizur Rahman and Soumya Sarkar in particular. If their key player’s fire, there is no reason why Bangladesh cannot get the better of India, even while playing away from home.