India's 19-match unbeaten streak ended in rather unbelievable fashion as they succumbed to a massive 333-run loss in the first Test of the four-match series at the Maharashtra Cricket Association Stadium on Saturday in Pune.

India's 19-match unbeaten streak ended in rather unbelievable fashion as they succumbed to a massive 333-run loss in the first Test of the four-match series at the Maharashtra Cricket Association Stadium on Saturday in Pune.

Chasing a huge total of 441, India fell to the guile of left-arm spin of Steve O'Keefe. He claimed six wickets in an innings for the second time in the match as India were bundled out for a meagre 107. Off-spinner Nathan Lyon also had a good day on a spinning track as he picked up the four wickets. 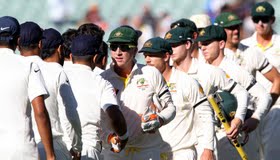 32-year-old O'Keefe finished the match with a memorable haul of wickets. The impressive win gave the visitors an unlikely 1-0 lead in the four-match Test series. Responding to the massive target, India were reduced to 99/6 by tea on the third day. O'Keefe had already claimed his second five-for in as many days. Cheteshwar Pujara was batting at 31 during the tea break. But, he too was dismissed soon after by O'Keefe. The formalities were completed soon after as the tail crumbled.

The openers failed under pressure as India collapsed to 16 for 2 quickly in the chase. Virat Kohli registered his second failure of the match when he left a straight ball from O'Keefe only to see the delivery crash into the stumps. Ajinkya Rahane and the rest of the middle and lower order also failed.

Earlier, Aussie skipper Steven Smith came up with one of the greatest knock by a batsman under pressure. His hundred was a lesson on how to bat on a rank turning. His 109 killed any minute hopes India might have had of making a comeback. Significant contributions from the lower order enabled Australia to set a target well beyond India's reach.