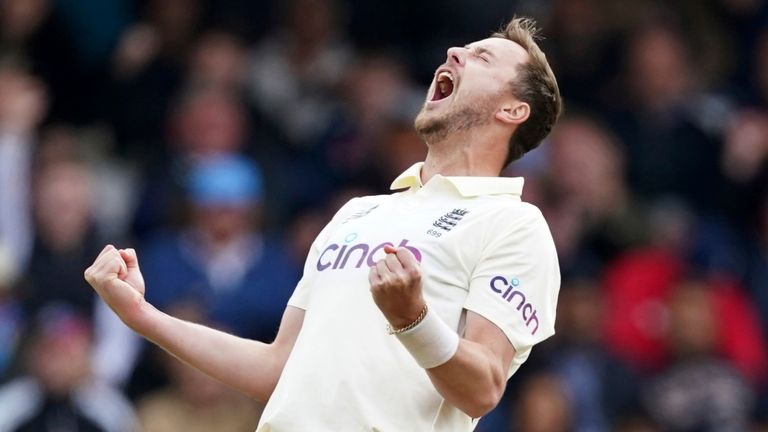 I'm definitely going to be trying to get under their skins: Ollie Robinson on Ashes battle with Aussies

England pace bowler Ollie Robinson has proclaimed that he wouldn’t back away from having a go at the Aussies in the upcoming Ashes series. Robinson claimed that, according to him, the Englishmen have a more than decent chance of taking the urn back home.

The 28-year-old was impressive in the Test series against India at home, claiming 21 wickets in four matches, even troubling a big player from the opposition - skipper Virat Kohli. Returning from a short ban that was imposed on him after his historical racist tweets came to the fore, Robinson displayed plenty of penetration against India.

Looking ahead to the Australian challenge, the fast bowler admitted that he would try to unsettle the opponents with his bowling and verbals as well. He commented, "I'm definitely going to be trying to get under their skins and try and sort of unsettle them as it were, batters and bowlers really. If I can get them off their rhythm then we're winning, so it's something you'll definitely see and hopefully we will come out on top.”

The Ashes series will kick off with the first match at the Gabba in Brisbane from December 8. There has been plenty of hype surrounding the big game. The match should generate a lot of talk within the betting community, so make sure to look for a no deposit bonus sportsbooks. The Ashes come in as the favorites as the bookmakers made England the underdogs despite the return of Ben Stokes. Australia to win at 1/3. Draw at 7/1. England to win at 9/2 at the time of writing this.

Australia played the T20 World Cup final in the UAE, which they won and served a quarantine period. According to Robinson, since England have got more time to prepare, that could give them a slight advantage going into the first Test. The pacer explained, "They were at the World Cup (final) and in quarantine so they are probably a few weeks behind us. We feel like we have some good work in us since being here and hopefully that will give us the edge in the first Test. I feel we are definitely the underdogs but we can take the urn home."

Robinson also added that he would look to target Australian vice-captain Steve Smith during the Ashes. The England bowler explained that Smith plays a lot of balls from deep in his crease, so his contact points are a lot deeper than other batters.

He elaborated, “So my lengths might have to be slightly different to him. If you start to starve him of his scoring areas, he seems to want to score. He's not someone that will just sit there and block all day. Hopefully, he'll make the mistake or if the ball is moving I can get him lbw or nick off.”

Smith hammered a monumental 774 runs during Ashes 2019 despite missing a Test match due to injury.

Robinson further revealed that he hopes to emulate former England all-rounder Andrew Flintoff, having watched him play during the 2006-07 Ashes series. Although England lost the series 5-0, the 28-year-old pacer recalls some fine performances from Flintoff.

Robinson told reporters ahead of the first Ashes Test, "I haven't been here (to Brisbane) before to play but I watched the Test match here when I was 13. That was pretty special and I was lucky to be here," Robinson told British media. "There were moments in that series that I remember, I think Freddie got 89 one day (in Sydney) and I remember thinking he just took it to the Aussies. Growing up that's what I wanted to do and how I wanted to play my cricket."

England captain Joe Root praised Robinson's ‘fantastic’ bowling performances despite facing a personal turmoil on his Test debut. Immediately after making his debut against New Zealand in June, Robinson had to serve a short ban after his offensive historical tweets came to the fore.

Robinson, however, returned for the Test series against India and proved highly effective. He is being viewed as a potential threat by Australia heading into the Ashes.

Speaking to reporters, Root said about Robinson, "You look at how Ollie's taken to Test cricket, he's been fantastic. His performances have been very good and have stood up. He's had to deal with some instances already in his career, so for him to be able to overcome that and still perform how he has is impressive in many ways.”

Kent-born Robinson has so far represented England in five Tests and has claimed 28 wickets at an impressive average of 19.60 with a best of 5 for 65.

Win with the best odds for online cricket betting in India at PureWin. Discover the greatest variety of cricket events and s markets available in India today with superb cricket betting odds on all imaginable cricket events and tournaments from every part of the world.
Roulette is one of the original table games at any casino. Now with technology, India's most popular roulette game takes the fun to you, allowing you to play whenever and wherever you are.
Play live casino games at 10Cric and enjoy HD quality live casino games with real live dealers from all around the world. Gamble on popular games such as roulette and blackjack, streamed directly on your phone!