In the days leading up to the Durban Test, there had been plenty of talk about the future of AB de Villiers in international cricket, given the amount of burden he has been carrying. Following the decision to ask de Villiers to keep wickets in Tests again in spite of his obvious dislike to do so, murmurs have only grown stronger.

In the days leading up to the Durban Test, there had been plenty of talk about the future of AB de Villiers in international cricket, given the amount of burden he has been carrying. Following the decision to ask de Villiers to keep wickets in Tests again in spite of his obvious dislike to do so, murmurs have only grown stronger. And, with de Villiers having put down a couple of chances at key moments during the ongoing Test, it is only fair that he sits down with the men who run cricket in the country, and discusses how to manage his heavy workload. That can wait for now though. On Wednesday, de Villiers will have to try and get his act together with the bat.

England will clearly head into the final day at Durban with their noses well in front. It was a given at the end of day three that South Africa were never going to chase down whatever England set. But, they would have had a fair chance of saving the game had they done better with the bat in the second innings. Losing four wickets before the end of day four however means their chance to push for a draw has been severely dented. The slim chances they have of saving the Test, as it has often been in recent times, rests with de Villiers. He will resume his innings on 37 not out, and will have to shepherd the lower order and the tail if the Proteas want to entertain any hopes of a draw.

What would disappoint the Proteas the most about their batting performance on day four is the fact that their batsmen wasted starts. In Tests, 30s and 40s don't count for a lot, and this is what Stiaan van Zyl and Dean Elgar got. Of course, one cannot be too harsh on the latter for he carried his bat through in the first innings even as the others fell away. But, for van Zyl, this was a chance to make amends for his failures in recent matches. He has got into a habit of getting out after getting his eye in. With the kind of scores he has been getting, the opener cannot expect to hold on to his place in the team for long. 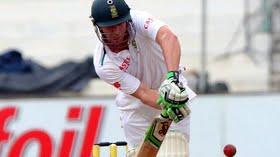 Another failure for South African captain Hashim Amla would mean that the selectors would now be mighty concerned with his prolonged lean spell. Amla tried to be assertive during the time he spent out in the middle, but got a good delivery that he managed to edge behind the wickets. Amla's mode of dismissal was clearly one that shows his growing loss of confidence. It is still a bit early to say that time is running out for the South African Test skipper, but continued failures would mean that the time will come soon. Faf du Plessis got a terrific delivery to which he could do nothing but edge behind the wickets, but he is not helping his cause playing rash strokes.

England are in firm control heading into the final day at Durban. And, they must thank two men specifically for the great position they find themselves in. Jonny Bairstow's wicket-keeping skills may still be a matter of debate, but he did his chances of retaining his place as pure batsman no harm with an aggressive innings that ensured England had a total they would be extremely confident of defending. He had been dismissed in the 40s many times previously, so crossing the fifty mark would please him. Steven Finn also came up with a terrific bowling performance late in the day. His three crucial strikes may end up making all the difference in the end.